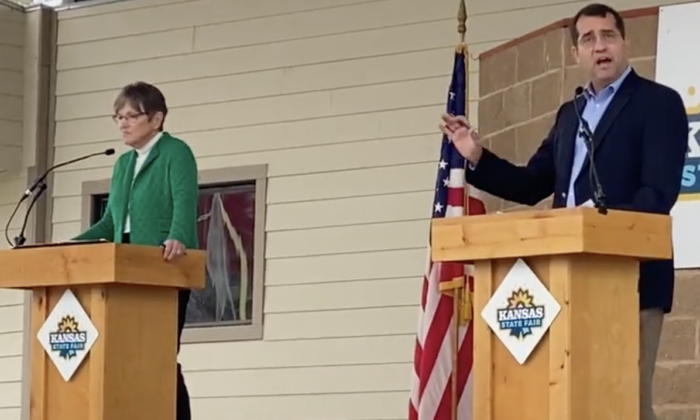 Kansas Attorney General and Republican gubernatorial candidate Derek Schmidt tells the audience that incumbent Democrat Laura Kelly (left) has "done more damage than any governor in the history of the state" during their Sept. 10 debate at the Kansas State Fair in Hutchison. (Courtesy of Schmidt for Kansas)
2022 Midterm Elections

Despite August Vote, Abortion an Issue in Kansas Governor Race

The Kansas State Fair kicked off its annual 10-day run with a noteworthy bang on Sept. 9 as Stillwell farmer Matt Jacobs’ 1,280-pounder broke the state’s all-time pumpkin record and ribbons were awarded for best scarecrows, biscuits, and butter sculptures.

Staged in Hutchison, the state fair is a late-summer celebration of tradition, innovation, and novelty with all three apparently baked into its signature ‘OMG Chicken Sandwich,’ a cereal-coated fried chicken breast wrapped in syrup-slathered bacon wedged inside a doughnut.

Among other Kansas State Fair traditions, it is where, every four years, candidates for governor meet to debate for the first time, signaling the start of the final sprint to November elections.

So it was that first-term incumbent Democrat Gov. Laura Kelly and Kansas Attorney General Derek Schmidt, her Republican challenger, engaged in the first face-to-face exchange of their gubernatorial race on the fair’s Peoples Bank & Trust Arena stage on Sept. 10.

Although the 90-minute debate unfolded on a Saturday before noon, both candidates were accompanied by full-throated supporters who demonstrated full-throttled intolerance of opponents’ views in back-and-forth broadsides and shout-downs. A sober exchange and examination of competing ideas, it was not.

Schmidt, the state’s three-term attorney general, doubled-down on his opposition to abortion, claiming the fact that Kansans on Aug. 2 shot down a proposed amendment eliminating access to abortion as a right by 165,000 votes, or by a 59-to-41 percent margin, doesn’t mean the state’s conservative voters support “unrestricted” access.

He said if elected governor, he would support the state’s Republican-controlled Legislature if it imposed restrictions on abortion because it is the role of state lawmakers to make such decisions in accordance with the U.S. Supreme Court’s June repeal of Roe v Wade.

“I’m pro-life,” Schmidt said. “I supported the constitutional amendment. Kansas voters have decided, which does not mean the discussion has ended.”

Kelly agreed that Kansas voters have decided which, to her, means the discussion has ended. She reiterated that she would stand with an overwhelming majority of Kansans in defending medical privacy and reproductive rights against government overreach.

While Schmidt said he would contemplate removing several of the six Kansas Supreme Court justices who interpreted the state’s Bill of Rights includes a right to abortion, Kelly said she would reappoint all six when their terms expire.

Both Kelly and Schmidt blew past nominal opposition in slam-dunk Aug. 2 primary victories and have millions to spend in what is projected to be among the nation’s most compelling governor elections this fall.

The Kelly-Schmidt race is one of 36 gubernatorial elections nationwide this fall. Kelly is among 22 Democratic governors seeking re-election, but the only one trying to do so in a state that former President Donald Trump won in 2020, garnering 56 percent of the vote.

The race is rated a “toss-up” election by the Cook Political Report, Inside Elections with Nathan Gonzales, and Larry Sabato’s Crystal Ball.

Kelly’s campaign reported to the Kansas Secretary of State Office’s Elections Division (KED) on July 25—the last report on file as of Sept. 12—that it had raised more than $3.46 million, spent about $2.12 million and had $1.3 million in cash on hand.

Kelly touts bipartisan achievements in campaign literature, claiming she “has brought together both parties to get things done for Kansas.”

Since assuming office in 2018, Kelly’s campaign states “Kansas has seen a record of over $8.6 billion dollars of investment in new business initiatives and the creation and retention of over 48,000 jobs.”

Kelly bashed Schmidt for his alleged association with “disastrous” budget and tax policies adopted under former Republican Gov. Sam Brownback, claiming he “supported the agenda that rode us into the ditch.”

“Derek Schmidt stood by Brownback tax cuts to our schools,” she said. “He even went to court to keep those cuts in place.”

At yesterday’s #StateFairDebate I asked my opponent if he thought we were better off now than under Sam Brownback. He wouldn’t answer. pic.twitter.com/lHbnOjPjhn

Schmidt, who served in the Senate with Kelly before being elected attorney general three times, said he is the appropriate conservative to ensure individual freedoms and the Constitution are protected.

He ripped into Kelly for her administrative orders during the COVID-19 pandemic that resulted in business and school closures, stating he would never impose overreaching authority on Kansans.

“Fully funding schools can only work if you don’t lock the kids out of them,” he said, suggesting the state allocate more funding to hire armed school security, the “best guarantee” to prevent shootings.

“What we should not do is turn this into an excuse to take guns away from law-abiding American citizens,” he said, claiming Kelly is opposed to the Second Amendment.

Untrue, Kelly responded. “What I’m talking about is background checks,” she said. “Ensuring that guns are locked up and kept away from children in the home. I think every commonsense gun owner would agree with me.”

Schmidt said spending under Kelly has surged and that she will continue to increase Kansans’ tax burden by endorsing Democratic President Joe Biden’s policies.

“We must not adopt government policies that try to turn Kansas into California,” Schmidt said during the debate. “Gov. Kelly is wrong in her philosophy. So many Kansans tell me they are anxious about our freedoms, our future, and our commonsense values we thought we all shared. Many worry creeping big-government socialism is replacing the opportunity and self-sufficiency that motivated and empowered so many Kansas stories in years past.”

The state fair debate is the first of at least two that both parties have agreed to participate in. The second, hosted by the Johnson County Bar Association, will be Oct. 5 and be broadcast by Kansas City PBS television. The Kansas Chamber of Commerce staged a question-and-answer forum with both separately on Sept. 7 in Olathe.

The debates have not included Libertarian Party nominee Seth Cordell nor Independent candidate Dennis Pyle, a state senator from Hiawatha who left the Republican Party in July to run under a third-party line.

While Kelly’s camp is all for their inclusion, figuring both are more likely to draw GOP votes, Schmidt’s campaign has resisted efforts to expand the debate stage beyond the two main party candidates.