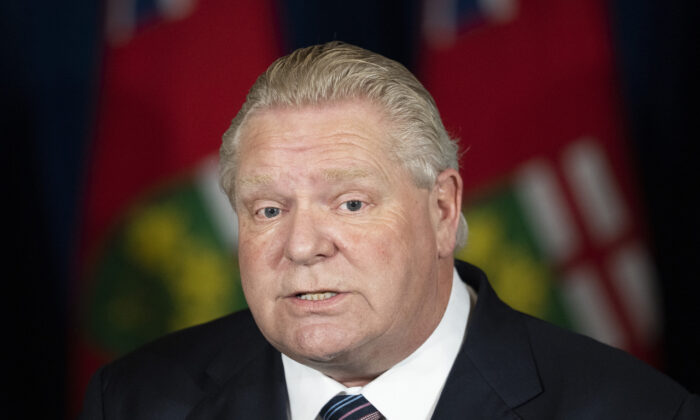 Ontario Premier Doug Ford holds a press conference at Queen’s Park regarding the easing of restrictions during the COVID-19 pandemic in Toronto on Jan. 20, 2022. (The Canadian Press/Nathan Denette)
Canada

Despite a Strong Mandate, Ontario PCs Failed to Deliver on Education Promises

Back in 2018, things looked hopeful on the education file in Ontario. Newly elected Premier Doug Ford had campaigned on a platform that included scrapping discovery math, strengthening curriculum standards, and focusing on the academic basics.

Given his bulldog reputation, there were excellent reasons to believe that Ford’s Progressive Conservative (PC) government would stand up to the typical special interest groups, especially the teachers’ unions. It helped, of course, that Ford was taking over from the deeply unpopular Kathleen Wynne. Ontarians were eager for change, and they gave Ford a strong mandate.

Sadly, Ford failed to live up to expectations. After nearly four years in power, student literacy and numeracy scores remain stagnant. Moreover, Ontario’s education system is more unstable than ever. Even some much-needed revisions to the math curriculum turned out to be a bust.

However, it wasn’t for lack of trying. Ford’s successive education ministers, Lisa Thompson and Stephen Lecce, genuinely tried to enact significant educational reforms. Unfortunately, both ministers were hamstrung by their own department officials, and even though the reforms they attempted made headlines, they didn’t achieve any significant results.

For example, in early 2019, then education minister Lisa Thompson announced that all students in the province would soon be required to complete four e-learning courses in order to graduate from high school. This announcement came out of nowhere and was not based on any credible research. In fact, there is not a shred of evidence that mandatory e-learning courses are beneficial to high school students.

Predictably, the mandatory e-learning plan came under heavy fire from the teachers’ unions, among others. Instead of focusing on meaningful education reforms, the Ford government expended significant political capital defending its ill-conceived e-learning proposal.

When Stephen Lecce was transferred into the education portfolio in the summer of 2019, one of the first things he did was scale back mandatory e-learning from four courses to two. He later backed down entirely, allowing parents to exempt their children from e-learning courses. While the government ultimately made the correct decision, it’s unfortunate for students that it took so long.

Last year, the Ontario government finally introduced significant changes to the math curriculum. Some of these changes, such as requiring elementary students to memorize the times tables, were long overdue. This back-to-the-basics approach was a welcome change fulfilling the government’s campaign pledge to abolish discovery math.

Unfortunately, the new curriculum also contained plenty of fluff that, even today, distracts from the government’s intent. For example, “social-emotional” skills will now be assessed in math, something that hardly fits in a traditional math curriculum.

To make matters worse, the original draft of the Grade 9 math curriculum contained bizarre statements about the allegedly racist nature of mathematics. Fortunately, these statements were removed after a public outcry, but the damage to the government’s reputation was done.

After four years in power, the progressive education ideology which deemphasizes subject-specific content knowledge (such as memorizing the times tables) and encourages teachers to avoid direct instruction still dominates Ontario’s education system. Many union leaders, administrators, curriculum consultants, and education professors have built their entire careers on progressive ideology and aren’t about to give in without a fight, no matter what the Ford government says.

To make matters worse, the Ford government has done an atrocious job of looking out for the interests of students over the last two years of the COVID-19 pandemic. Despite Ford’s insistence that schools would be the last to close and the first to reopen, Ontario students have missed more school than students in any other province or state in North America.

Simply put, Ford’s government has failed the students (and their parents) in Ontario. Despite the high hopes of 2018, Ford did not fulfill most of his campaign promises. From wasting precious time on useless e-learning initiatives to bungling the rollout of a new math curriculum to shutting down schools for months at a time, Ford’s government deserves a failing grade on the education file.

The one thing that might save Ford’s government is that his opponents would likely be much worse. Both the Liberals and the NDP remain beholden to special interest groups such as the teachers’ unions, and they would likely have shut down schools for even longer than Ford did. Given these options, many parents will reluctantly hold their noses and vote PC in the coming election.

But still, Ontarians deserve much better. If Doug Ford wants another term as premier, he needs to get serious about improving Ontario’s public education system. He cannot afford more failing grades.