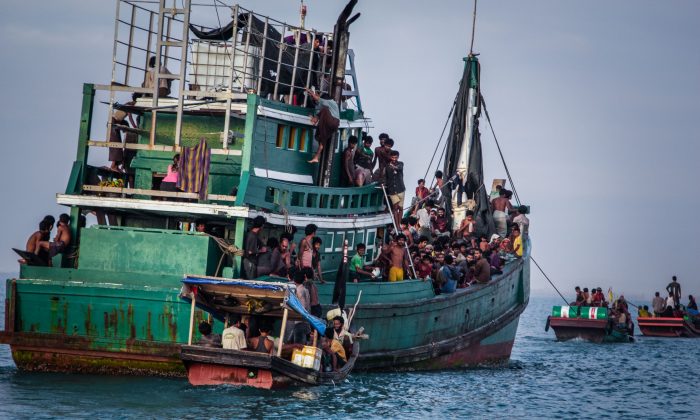 Rohingya migrants on a boat off Indonesia's coast await rescue on May 20. The Muslim Rohingya minority group is fleeing persecution in Burma. (JANUAR/AFP/Getty Images)
Opinion

From the shores of the Mediterranean to the beaches of Malaysia, an intense escalation in international migration threatens the global order.

In the large European countries of Germany, France, and Britain, a rough estimate suggests that around 5 percent of the population is born outside the country where they live. Pressures for more to enter are mounting.

During the first weekend of June, crews rescued 3,400 migrants off the coast of Libya with media reporting a million more waiting to cross the Mediterranean. From 2005 to 2010 almost 9 million people moved to Europe. Elsewhere, 3.5 million moved out of Africa. In Asia, 618,000 left Bangladesh for India, 489,000 went from Indonesia to Malaysia, and 258,000 people left Kazakhstan for Russia. In the United States, more than 1.8 million arrived from Mexico.

The root causes behind the movement of people on such a vast scale are persecution and poverty, and both require coordinated moves by the world’s governments.

The governments and citizens of the Middle East and Africa must confront persecution and religious extremism motivated by the belief that a higher power allows believers to brutalize and murder nonbelievers with a perverted sense of pride.

So far, responses to such attacks have been feeble. Fanatics display an uncanny instinct for exploiting democratic societies’ preference for soft power over hard power. Citizens must also speak out to reject false interpretations of religion and reduce recruitment.

Religious leaders and mainstream followers must form a global coalition to act as bulwark. Too many leaders and citizens close their eyes to distant persecutions, allowing extremism to spread. Citizens who do not speak out and act against such crimes can expect little help when the persecution turns against them.

As with the Syrians fleeing conflict for safety in Europe, the Rohingya Muslim refugee crisis in Southeast Asia illustrates the challenge for countries confronting such a crisis. Over the first three months of 2015 more than 25,000 fled Burma due to ongoing religious and ethnic persecution. Many tried to enter Malaysia, where concerns had been expressed about the humanitarian crisis, but an open door does not remove the root cause for so many fleeing Burma.

After some hesitation, Malaysia and Indonesia eventually offered temporary shelter while at the same time joining forces with Thailand and signaling to Burma that its behavior did not conform with the spirit of the Association of Southeast Asian Nations. All four nations are members of ASEAN.

The pressure against Europe from Africa, the United States from Latin America, and Russia from Central Asia is motivated by the lure of higher living standards. Key to a solution is a credible prospect of better living standards in their home countries. Comparisons with developed countries—readily apparent due to the globalization of communications and transportation—compound feelings of unacceptable inequality and unfairness.

So far, host countries have adopted an ambivalent attitude forged by a mixture of ethics, dysfunctional political systems, and a dependence on migrants because of falling populations. In the United States especially, illegal migration helps keep wages down and supports labor-intensive economic sectors.

Any country that has higher living standards than its neighbor can anticipate migrants.

Demographics suggest large numbers of potential migrants could leave their home countries. Any country that has higher living standards than its neighbor can anticipate migrants: 10 African countries south of Sahara are poised to more than double their populations to 785 million by 2050; South Asia will increase from 1.64 billion to 2.15 billion; Central Asia from 63 million to 85 million; 10 countries south of the U.S. border will see their populations increase from 231 million to 298 million.

Much has been written about inequality as an economic trend among and inside nations, including Thomas Piketty’s “Capital in the Twenty-First Century.” The statistic that 1 percent of the wealthiest Americans take 97 percent of income growth is alarming, but more threatening are reports that elites in emerging markets and developing economies transfer money out of their home countries to wealthier places.

Visible signs of this are evident in London where media reports suggest that wealthy people from Nigeria, Ghana, Congo, Gabon, Cameroon, and Senegal have spent close to $900 million over three years on glamorous and expensive residential estates.

The average income per capita of these countries is less than 20 percent of the figure for Britain. Any hope of domestic economic development is forfeited when those with skills, competency, and money willingly abandon the majority of their fellow citizens.

A cruel dichotomy is coming to rule the world. Elites from developing nations join forces with the wealthy in the developed countries, and the masses of poor are left to fend for themselves without hope and leadership.

The first step in a far-reaching policy effort is painful to acknowledge, but indispensable at least for Europe and possibly other rich nations: Huge numbers of potential migrants make an open-door policy unsustainable. The choice is between controlling migration now under somewhat orderly conditions or callous indifference to the suffering of others.

Europeans fear a change of culture. But a cultural shift has already infiltrated European society and hardened attitudes. European voters, without compunction, are increasingly abandoning the desire to emphasize policies that protect human rights and instead embrace political agendas that promote nationalism, isolationism, and xenophobia.

Forcing migrants to stay in poor and dangerous home countries aggravates social tensions unless determined efforts are made to strengthen economic and social development. A financial transfer of a magnitude not seen since the Marshall Plan—the U.S. initiative to aid Europe after World War II with $13 billion, worth $130 billion today—combined with giving less developed nations better access to the markets of wealthy developed nations is imperative. The issue is global, and Europeans are the first to face this grim reality.

Greater engagement in poor countries’ social conditions is also required. According to the United Nations, 225 million women in developing countries would prefer avoiding pregnancy, but are not using modern contraceptives. Again, few incentives exist to promote such policies and confront religious and other taboos on funding contraception in both the developed and developing nations.

Once again, national elites in the poor nations align themselves with the elite in other countries. The aim must be to encourage the local elite to take a lead not only boosting economic development in their own countries, but also coalesce with their compatriots on policies known to reduce poverty.

All is not hopeless. Africa’s economic growth is accelerating from just below 3 percent in 2013 to a forecasted 5 percent for 2016.

The wealthiest cannot continue to use developing nations for natural resources, low-cost labor, or dangerous and temporary manufacturing facilities while trying to construct some kind of fortress around their own homes that is impossible to defend.

Trying to build such fortresses is sure to ignite partisan divides and bring down democratic political systems, paving the way for repulsive political movements that want to protect a few and enshrine permanent inequality. This would amount to renouncing moral standards and ushering in an era of political strife, economic disasters, and armed conflicts—all of which would dwarf the costs of serious financial assistance and opening of markets.