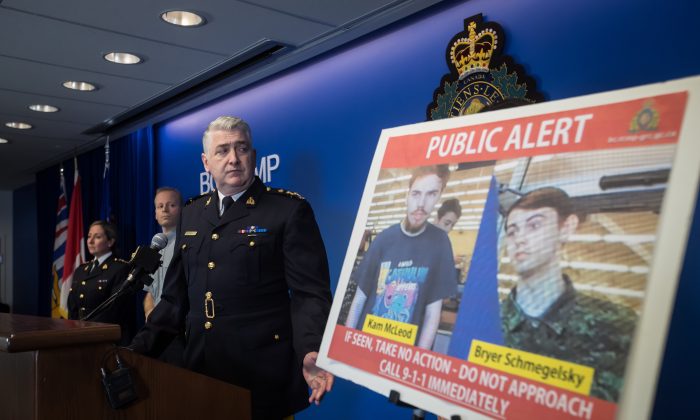 Security camera images of murder suspects Kam McLeod and Bryer Schmegelsky are displayed as RCMP Assistant Commissioner Kevin Hackett steps away from the podium after speaking during a news conference in Surrey, B.C., on July 23, 2019. (Darryl Dyck/The Canadian Press)
Canada

The Canada-wide manhunt for triple murder suspects Kam McLeod and Bryer Schmegelsky has consumed the media for over a week now.

McLeod, 19, and Schmegelsky, 18, are wanted in the murders of UBC professor Leonard Dyck as well as tourist couple Lucas Fowler and Chynna Deese.

The RCMP have combed parts of B.C., Saskatchewan, and Manitoba, but the pair continue to elude police, despite the use of modern technology like drones and thermal imaging.

There have been several cases over the years where Canadian law enforcement has had to launch large-scale manhunts to track down fugitives on the run. Following are five of the most famous ones.

In December of 1931, two police constables arrived at Albert Johnson’s cabin in Rat River, N.W.T., to question him about interfering with traps that weren’t his and possibly trapping without a licence.

Johnson refused to open the door or speak with them. When they returned with back-up and a warrant, Johnson shot one of the constables.

Thus began a manhunt that included police using dynamite to blow the roof off Johnson’s cabin, but Johnson was unhurt and continued to fire at the police. They had to retreat, and Johnson fled.

On Jan. 30, 1932, the RCMP located Johnson and thought they had him cornered. However, he shot one of the officers and managed to escape up an almost vertical cliff during the night. In February, thanks to support from the air, police finally caught up to Johnson and fatally shot him.

The manhunt across sub-Arctic terrain in the dead of winter captured the attention of the nation, according to the Canadian Encyclopedia, and earned Johnson the title “The Mad Trapper of Rat River.”

Facing trial for a double murder, Donald Kelly escaped prison in North Bay, Ont., and fled in a stolen car with a stolen rifle. After giving chase for 11 days with no success, Ontario Provincial Police called in Constable Ray Carson and his intrepid police dog, Cloud II.

Cloud II picked up Kelly’s scent near the town of Skead, east of Sudbury. The dog, his handler, and another officer followed the scent trail to a cabin in the woods. There, they found Kelly, who fired a shot and mortally wounded the dog.

A gunfight followed and a wounded Kelly escaped into the woods. He was captured later that afternoon and returned to jail. He was found guilty of the two murders he had originally committed and sentenced to life in prison.

Monster of the Miramichi, 1989

In May 1989, convicted killer Allan Legere escaped from a hospital in Moncton, N.B., triggering a manhunt that became one of the largest in Canadian history.

Serving a life sentence, Legere was being escorted by prison guards to hospital to be treated for an ear infection. While there, he managed to escape.

During the seven months he was on the run, Legere would kill four more people and sexually assaulted a fifth, leaving her for dead, according to the University of New Brunswick. The murders, which occurred in the Miramichi River valley, were so cruel and savage that he was dubbed the “Monster of the Miramichi.”

In a bizarre case in 2012 that sparked a manhunt in Canada, France, and Germany, 29-year-old Luka Magnotta was named the suspect of the death and dismemberment of a Chinese international student Jun Lin in Montreal. Parts of Lin’s body had been sent to the Conservative Party of Canada and the Liberal Party, while other parts were sent to two Vancouver schools and a Montreal park.

An arrest warrant was issued for Magnotta, which the RCMP later upgraded to a Canada-wide warrant. Later, Interpol issued a notice for the suspect as well, as it was discovered he had booked a flight out of the country. Magnotta first landed in Paris, and eventually made his way to Berlin, where he was arrested by police at an internet cafe while reading news about himself, according to CBC.

In 2014, Magnotta was found guilty of first-degree murder and received a life sentence without the possibility of parole for 25 years.

On June 4, 2014, Justin Borque, 24, shot five RCMP officers in Moncton, N.B., killing three and injuring the other two. A manhunt began and continued until the morning of June 6, when he was arrested.

For the approximately 28 hours of the manhunt, the city was locked down. Buses were not running, public services were suspended, businesses closed, and people were asked to stay away from the area.

The shooting was Moncton’s first murder since 2010 and the worst attack on the RCMP since 2005, when four RCMP officers were killed in Alberta.