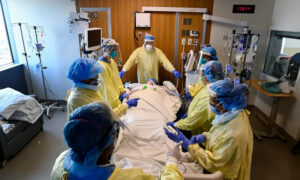 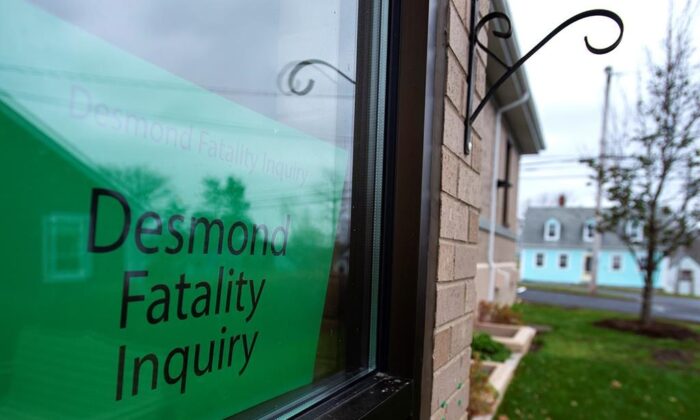 The Desmond Fatality Inquiry is being held at the Guysborough Municipal building in Guysborough, N.S. on Nov. 18, 2019. Lionel Desmond, a troubled Afghan war veteran diagnosed with PTSD, killed his mother, wife and young daughter before taking his own life. The inquiry's mandate, among other things, is to determine if Desmond and his family had access to the appropriate mental health and domestic violence intervention services leading up to their deaths. The inquiry has been put on hold until January 2020. (The Canadian Press/Andrew Vaughan)
Canada

PORT HAWKESBURY, N.S.—Nova Scotia’s chief firearms officer told an inquiry today that communications with his colleagues in other provinces have improved since a former soldier fatally shot his family and himself in rural Nova Scotia in 2017.

John Parkin was testifying at the provincial fatality inquiry investigating the death of former infantryman Lionel Desmond, who on Jan. 3, 2017, used a legally purchased semi-automatic rifle to kill his wife, daughter and mother before he turned the weapon on himself.

Desmond, an Afghanistan war veteran diagnosed with post-traumatic stress disorder, had his firearms licence reviewed on at least two separate occasions before the killings.

The inquiry, which started hearings in January 2020, has heard there were delays and confusion over the exchange of firearms-related information between Nova Scotia and New Brunswick when Desmond had a number of run−ins with the law in both provinces.

Parkin said there have since been changes that improved communications among firearms officials.

During hearings in March, the inquiry heard from a former firearms officer in New Brunswick, Joe Roper, who also said there was confusion over incidents involving the RCMP, which he blamed on the lack of access to police reports.

At the time, firearms officers were required to file requests with an RCMP liaison officer to obtain police records, a process that could sometimes take weeks.

As well, Roper said, the files received from the Mounties were just summaries.

Roper said “the biggest deficiency” when he was a firearms officer was that his office didn’t have ready access to police files through the RCMP’s Police Reporting and Occurrence System, otherwise known as PROS.

On Monday, Parkin told the inquiry that firearms officers now have access to PROS through a so-called police portal, but it does not provide full access to police files.

“There have been some technological issues,” he told the inquiry. “We have more access than we used to through the portal. We can glean bits of information from that.”

The inquiry is now in its final phase. Hearings were supposed to wrap up this week, but are now scheduled to continue until next month and could extend into November.

The head of the inquiry, provincial court Judge Warren Zimmer, is expected to start writing his final report once the hearings conclude.

The inquiry’s mandate is to determine the circumstances of the four deaths and whether Desmond and his family had access to mental health and domestic violence intervention services. As well, the inquiry will examine how Desmond managed to purchase the firearm he used to kill his family.

Zimmer’s report will include recommendations for change but it will not contain any findings of legal responsibility.