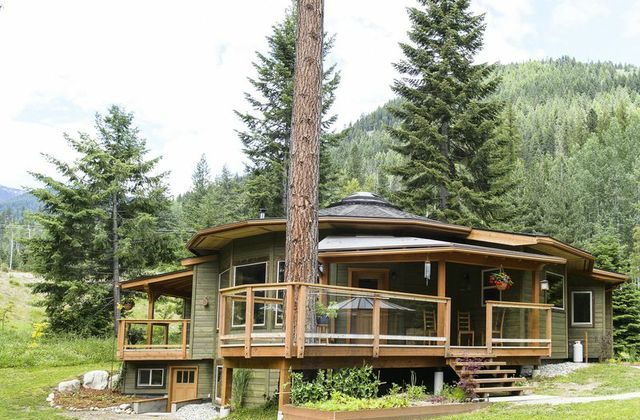 This Magnolia 2300 is a round home composed of a 31' circle surrounded by 12' radiating wings that seamlessly integrate private rooms with gardens and outdoor rooms for comfortable living connected with nature. (Electrify Photography)
Home

Designers Turning to Circular Houses for Sustainability, Durability in Wind

VICTORIA—Energy-efficient homes have become the norm and in the pursuit of sustainability home owners and designers are returning to a more traditional type, the round home.

But what many residents of circular houses have found is that there are also spiritual and emotional benefits to the shape.

Rebecca Christofferson, clinical counsellor and art therapist, lives in Vancouver Island’s Cowichan Valley and had intended on building a round cob home on her property. But when she realized there was an existing home on the lot she decided to erect a yurt to serve as a guest bedroom, workshop, and spiritual healing space.

“A big part of why I decided to build a yurt was the circular space,” said Christofferson. “The imagery of the nomadic was significant as well, and you don’t need to have it permitted so there is a real freedom with that.”

“People who have spent time in our yurt have said the world sort of shuts out,” said Christofferson. “It just feels like a huge blanket on the space; it is womb-like. The world slows down and it is energetically quieter.”

Some people have chosen yurts, or gers as they are called in Mongolia, for their tent-like portability. But designer/entrepreneur Lars Chose channels the spiritual qualities he’s identified in round homes with modern performance-building qualities into the permanent structures he creates with his company Mandala Homes.

Chose had been designing and building homes for 10 years as well as working as a psychotherapist before he started Mandala Homes, but it wasn’t until 1995 that he designed and built his first round house.

“I saw where the world was going with the environment and the work I was doing with children and families,” he said.

“It came to me one day that I had an integral role as part of the change that needed to happen in the world.

“I had been studying how modern dwellings take 50 percent of our resources to build and 50 percent of our resources to cool and keep warm, and this didn’t seem right to me—it’s absolutely not sustainable for my children’s children. So I decided to start a company and use the round (shape) as a way to express both an environmentally friendly and a healthy sustainable home.”

As a practising Buddhist, Chose said the beautiful shape, the structural engineering, and the interlocking design fit well with the word “mandala” which has a distinct significance in Buddhism.

According to Chose, mandala means the interconnected whole.

“I believe that we are happiest when we live in an awakened sense of knowing that we are interdependent,” he said.

“There is no separation; it is our greatest pain to think that we are separate. To be in a building that is, literally, shaped to communicate interdependence in a way that you can sense it—experientially, emotionally, psycholologically, and physically—is a powerful experience.

Even though the round spaces created by yurts and designers like Chose create various spiritual connections, other companies like North Carolina’s Deltec Homes got into circular construction for more practical reasons.

The Asheville company began in 1968 supplying buildings to the resort industry.

Joseph Schlenk, director of marketing and sales, said their clients were coming to them wanting a structure that could be durable, energy-efficient, easy to build, and take advantage of outstanding views.

“The original Deltec structure was an A-frame,” said Schlenk. “We learned very quickly that was not energy efficient or durable, and in that same year we developed the polygonal structure, the predecessor to the Deltec structure today.”

Deltec—which now ships hundreds of homes throughout Canada including Baffin Island—has seen a complete shift in their clientele, from 100 percent in the resort industry to 95 percent residential.

“We have a long history of success as far as durability,” said Schlenk. “We have never lost a home because of high winds. The same qualities that make them resistant to high winds also make them very energy-efficient.

“They are aerodynamic. There are not any great significant areas of flat surface where air or wind can build up pressure. It flows around the building so there is very little threat to drafting.”