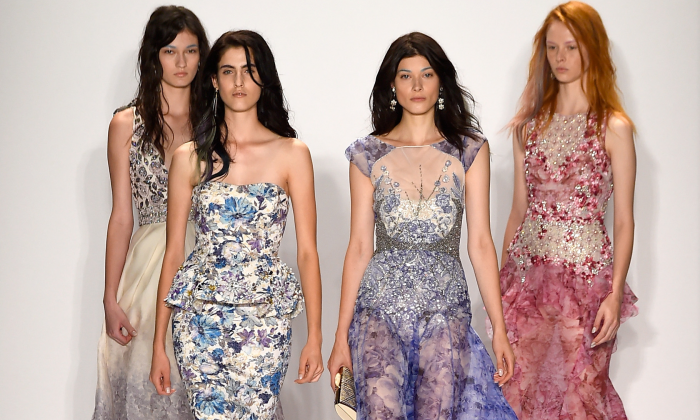 Even half way through New York’s Fashion Week there were already two distinct camps among the designers showing their Spring 2015 collections. On one side, the minimalists opted for neutral colors and structure stripped of all embellishments. But then, there were the flower lovers-designers who reveled in naturalistic or stylized plant motifs of all shapes and sizes.

And there was lots of lace.

The abundance of flower prints was so evocative of spring that it was only tainted by the thought that we haven’t even made it through fall or winter yet.

The Desigual models set the tone with their head-dresses made up of giant peonies, roses, chrysanthemums, lilies, and other generally large flowers.

It was an explosion of color with some cheeky fun in the mix as the models carried thought bubbles, just like in cartoons. “Looking for boyfriend,” or “I love photographers” read the bubbles. And for once the models were allowed to smile. It was almost as if spring were coming.

In a similar yet much more restrained way, Badgley Mischka muses floated onto the runway like a Botticelli painting come to life, wearing long gowns in sheer fabrics that were flooded with minuscule spring blossoms. The collection was balanced with ivory and beige dresses and two piece ensembles.

Naeem Khan also channeled the spring blossoms. A couple of gowns featured the painterly flowers in an ombre effect.

His collection was particularly varied in the graphic styles through which he depicted flowers and plant motifs. The show-stopper was a halter-neck gown with a billowing skirt in a print of giant pansies.

But Khan didn’t stop there. He went as far as covering a mini dress in colorful stylized beaded flowers reminiscent of 1960s textile prints. In between the colors he added black flowers here and there to pull the whole visual feast together.

Carolina Herrera took the flower, synthesized and fragmented it, adding an element of the abstract with a rectangular panel that gave it a 3D quality.

In a gown with cap-sleeves she blew up frangipani blooms out of proportion and set them against a black background. The overall effect was overwhelming as the thin model seemed to emerge out of the frangipani flowers.

A white stripy tulip became the graphic print for a beige skirt—just for the love of the negative space in the patterns of its petals.

Tadashi Shoji took inspiration from Venetian palaces and used plant motifs such as the pomegranate flower that is often depicted on Venetian fabrics. His plant life was incorporated in the structure of lace fabrics, which he used almost exclusively in his spring collection. Not surprisingly, the cut was restrained—A-line dresses and capes of all lengths.

The simple cut of the dresses was accented by rectangles of see-through mesh at the waist, cleavage, or just above the knees.

“It’s the juxtaposition of power and the feminine,” Shoji told the Associated Press backstage after his show at the Lincoln Center tents.

The finale to the collection was an evening gown in gold lace complete with floor-length cape—homage to the grandeur and opulence of Venice.

Lela Rose took the rose and did some memorable things with it.

In one outfit a billowing sheer skirt with giant black polka dots is paired with a black sleeveless top in the center of which is a giant rose with white, gray, and black petals. It’s not likely that a Lela Rose customer would wear both pieces together, but if she did she will have to counter-balance it with considerable personality—gumption, is it?

The collection also featured exquisite vibrant blue roses like those seen on the finest porcelain crockery. They were used sparsely in simply cut dresses. The same painterly roses also appeared in the brightest yellow. An A-line sleeveless evening gown with these bright yellow roses on white silk was the very embodiment of summery sophistication.

Just when you thought it was all over with the flowers, Oscar de la Renta creations came forth from between the flower laden panels of his runway entrance. Could it get any more floral than this?

De la Renta and Diane von Furstenberg must have been on a telepathic wavelength when they got the idea of juxtaposing floral motifs and checks.

The black and white checks in the von Furstenberg collection were overlayed with bright green or white lace. The designer herself wore the green version for her end of show salute.

A long sleeve white dress depicted the most stylized flower, but this time it was a geometric floral pattern in the structure of the white mesh fabric. A very modern and minimalist take on the whole theme.

De la Renta’s flowers ranged from the most naturalistic embroidered depictions, to the simplest geometrical four-petal flower. It was a welcome relief from all the multicolored blooms so abundantly paraded, and perhaps a return to innocence and simplicity.

It was also a return to white—which inevitably follows the chromatic visual feasts of the warmer seasons’ fashions.