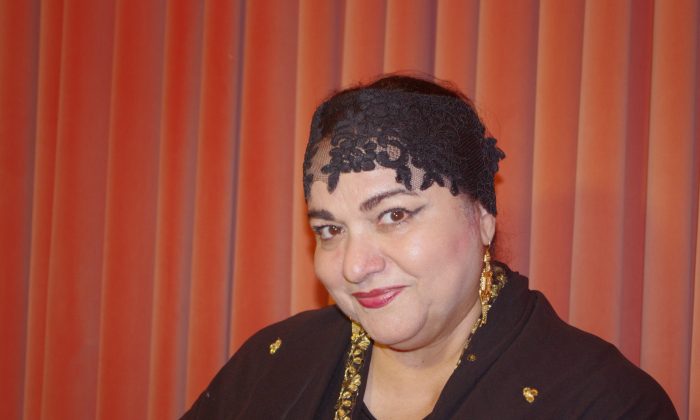 “I like very calm music, and it just makes me relax when I listen to it,” said Ms. Dorriz on Friday after seeing the orchestra at the Segerstrom Concert Hall. “I forget everything.”

“It was just art,” Ms. Dorriz added. “When I hear this music, it just gives me a creative mind. I enjoy listening and creating things in my mind.”

That includes a suit and shawl for Hilary Clinton, former U.S. secretary of state, and famed singer Natalie Cole, who wore a dress designed by Dorriz and her son for her concert in August at the Hollywood Bowl.

The Shen Yun Symphony Orchestra is truly one-of-a-kind, being the world’s only orchestra that combines both classical Western and Chinese instruments as its permanent members, according to the orchestra’s website.

“Using a Western symphony orchestra to present and revive China’s authentic traditions is no easy task,” it explains. “Interpreting Chinese musical styles on Western musical instruments requires remarkable versatility, informed imagination, and rigorous collaboration on the part of the composer, conductor, and performers.”

“Be it the trombone mimicking the sacred sounds rumbling from Himalayan peaks, or strings capturing a jubilant folk tune, the final musical experience is the result of tireless collective efforts.”

Ms. Dorriz enjoyed the performance so much that she is planning on bringing a new group of friends to one of the Oct. 19 performances.

“It was just amazing,” said Ms. Dorriz. “I really enjoyed it, yes.”

“Chinese culture is amazing, and I recommend to everyone—everyone—to see this show,” she added.

The symphony orchestra has accompanied Shen Yun in its performances but was only heard in concert for the first time last October in Carnegie Hall in New York City.

This year, the orchestra is touring seven cities.

Ms. Dorriz took in Shen Yun in one of its performances two years ago, and she’s also looking forward to March 11, when the performing arts group—which features the orchestra, dancers, a digital backdrop, and handmade costumes—is returning to Los Angeles.

“It’s good for costume designers like me to watch that and come over and over and get some inspiration, yes!” said Ms. Dorriz, referring to the way Shen Yun presents an all-new performance each year, including brand new costumes and color combinations.

“I just love everything about Shen Yun,” she said. “My favorite.”