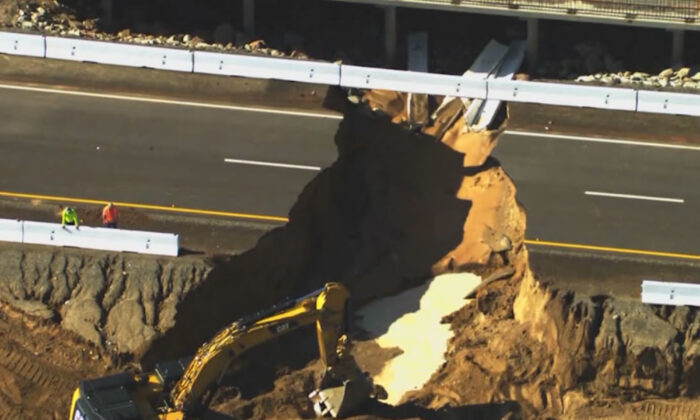 DESERT CENTER, Calif.—The main highway from Los Angeles to Phoenix was damaged by a flash flood that washed out part of the road through the Southern California desert.

The flooding began Wednesday evening amid the latest round of monsoonal thunderstorms to hit the region this summer. The damaged roadway was part of a detour past a repair project along eastbound Interstate 10 near the small community of Desert Center, about 165 miles east of Los Angeles.

The California Department of Transportation on Friday said crews were working around the clock to restore the detour lane by early next week, which would reopen both eastbound lanes to motorists.

In the meantime, officials recommend for motorists leaving Southern California to use Interstates 8 or 40, which are major detours.

Initially, officials closed traffic in both directions. Westbound lanes for traffic from Arizona to California was reopened, followed by one eastbound lane of the highway.

On Thursday, more than 2 inches of rain fell in the Mojave Desert and flash floods damaged several roads. Campers at the Hole-in-the-Wall Visitor Center and Campground in the Mojave National Preserve were briefly stranded until temporary repairs were made.

Other roads nearby were also closed in the wake of the rain.

“The Mojave Road, a historic trans-desert pathway and now a dirt road, remains impassable across Soda Lake due to standing water and deep mud that would strand even four-wheel drive vehicles,” according to the Mojave National Preserve.

Flash floods earlier this summer badly damaged roads in Death Valley National Park, which caused hundreds of visitors to be stranded by floodwaters and debris-covered roads. It took about two weeks for the park to reopen its most popular areas.