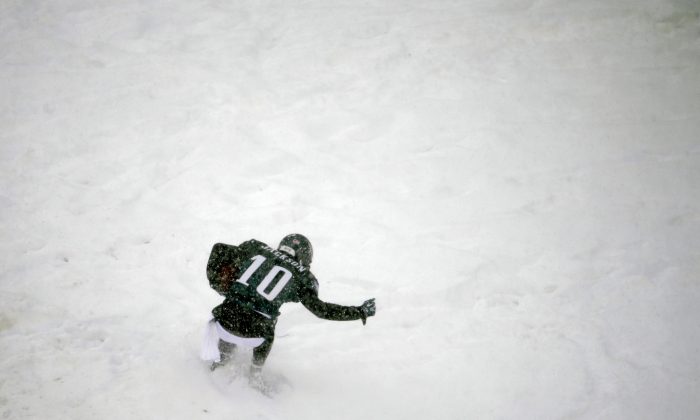 Philadelphia Eagles' DeSean Jackson celebrates in the snow after a touchdown during the second half of an NFL football game against the Detroit Lions, Sunday, Dec. 8, 2013, in Philadelphia. (AP Photo/Matt Rourke)
Sports

DeSean Jackson is being accused of associating with members of the Crips street gang on Friday after he was released by the Philadelphia Eagles.

Jackson was released by the Eagles because officials in the team “are concerned about having him around the younger players,” a source with the organization told NJ.com.

The Eagles apparently released Jackson out of concern he was affiliated with the Crips, a Los Angeles street gang. Two members of the gang have been connected to two murders in 2010, NJ.com reported.

Jackson, however, wasn’t anywhere close to the crime scene in December 2010 when two members of the Crips shot 14-year-old Taburi Watson. Jackson was apparently associated with one of the suspects, Theron Shakir.

But, according to Jane Robison of LA District Attorney’s Office, “DeSean Jackson was not part of the case. He was not a charged defendant. He was not a witness.”

Jackson was coming off a career-best season in Philadelphia, leading the team with 82 catches for 1,332 yards and nine touchdowns. He had a $10.25 million contract for the 2014 season and was signed through 2016.

“After careful consideration over this offseason, the Philadelphia Eagles have decided to part ways with DeSean Jackson,” the Eagles said in a statement.

Jackson thanked the Eagles organization and fans in his own statement Friday, and also denied “unfounded reports” that he was released for off-field issues.

“I would like to make it very clear that I am not and never have been part of any gang,” Jackson said in a statement. ” I am not a gang member and to speculate and assume that I am involved in such activity off the field is reckless and irresponsible. I work very hard on and off the field and I am a good person with good values.

“I am proud of the accomplishments that I have made both on and off the field. I have worked tirelessly to give back to my community and have a positive impact on those in need. It is unfortunate that I now have to defend myself and my intentions. These reports are irresponsible and just not true.”

Jackson has 356 career receptions for 6,117 yards and 32 touchdowns. He’s a dangerous returner who went to the Pro Bowl in 2009 after taking two punts the distance. Jackson has four career scores on punt returns, including the memorable 65-yard game-ending return to cap a comeback win over the New York Giants in 2010.

The 27-year-old receiver is entering his seventh NFL season.