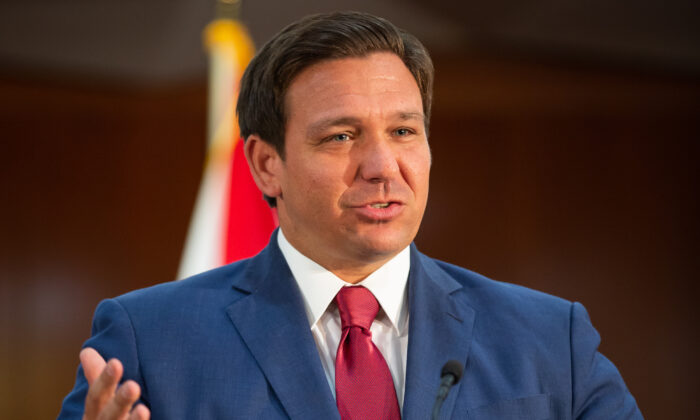 Florida Gov. Ron DeSantis in April 2022. (Courtesy of the Florida Governor's Office)
US

PUNTA GORDA, Fla.—Gov. Ron DeSantis has vetoed a bill that would have altered the state’s alimony laws in a controversial push that critics say “threatened to impoverish older ex-spouses who have been homemakers and depend on the payments.”

It is an emotionally charged issue that has a long history dating back to Rick Scott’s tenure as governor between 2011 and 2019.

On June 24, DeSantis decided he was not going to overhaul the alimony law that has now been “up to bat” three times and has had its third strike.

The bill would have nixed permanent alimony and set up maximum payment based on the “duration of marriage.”

In the past, the measure has drawn emotional debate among legislators during the session that ended in March.

“If CS/CS/SB 1796 were to become law and be given retroactive effect as the legislature intends, it would unconstitutionally impair vest rights under certain pre-existing marital settlement agreements,” the governor wrote in his veto letter.

During the legislative process, many ex-spouses turned out to tell legislators that they did not want the bill because they agreed to give up assets at the time of their divorce in exchange for “permanent alimony awards.”

Those in favor of the bill said that the bill would “modernize” Florida’s alimony laws by making the process more “equitable and predictable” for those seeking a divorce.

In a written statement Marc Johnson, a Tampa lawyer and also the president of Florida Family Fairness released a prepared statement expressing disappointment in the governor’s decision to veto the bill.

“We are incredibly disappointed by the veto of this much needed bill. Today, Gov. DeSantis chose divorce lawyers over Florida’s families and parents who love their children and who want to be a part of their lives,” Johnson wrote.

If the bill had passed, it would have cut eligibility to alimony payments for those married for fewer than three years, but those who had been married 20 years or longer could receive payments for up to 75 percent of the terms of the marriage.

In addition, the bill would have required judges in divorce cases to begin with a “presumption” that children should split their time equally between parents.

At the time, then-governor Rick Scott pinned his 2016 veto of an alimony bill on a similar child-sharing provision.

The Family Law section of the Florida bar lobbied against the bill and thanked the governor “for understanding the bad precedent the retroactivity” of the measure would have established.

“If signed into law, this legislation would have upended thousands upon thousands of settlements, backlogging the courts and throwing many Floridians’ lives into turmoil,” Philip Wartenbert, the chairman wrote on Facebook.

Advocacy groups on both sides of the issue had lobbied DeSantis’ office.

In a June 24 Tweet “First Wives Advocacy” group said that it had delivered a petition bearing more than 2,000 signatures asking for the veto.

In support of the bill, the governor’s office reported they had received 5,939 emails and 1,250 opposing the bill.  Phone calls supporting the bill tallied 349 with 289 against the measure.

Some of the telephone transcripts and emails were released by the governor’s office where some were pleading with the governor to veto the bill because it would “hurt women and families” and “force some into poverty.”

“The likely consequences are that women will largely be impacted, particularly women who divorced after long marriages where they might have put their careers on hold to support their now ex-husbands,” Felice Schulaner, a concerned citizen told the governor’s office in a recorded message.

“How many women will lose their homes?” he asked.

Murielle Fournier, another concerned Florida resident, wrote to the governor and described her settlement as a “good faith contract” that was “amicable” between her and her ex-husband where he is not allowed to “modify his payments,” and the bill could potentially affect her “nest egg.”

“It’s a contract that I made under the current law,” she wrote. “I work and have to rent a room because I can’t afford to rent my own place—I don’t own a home, no retirement plan, no nest egg. This bill will devastate me financially.”