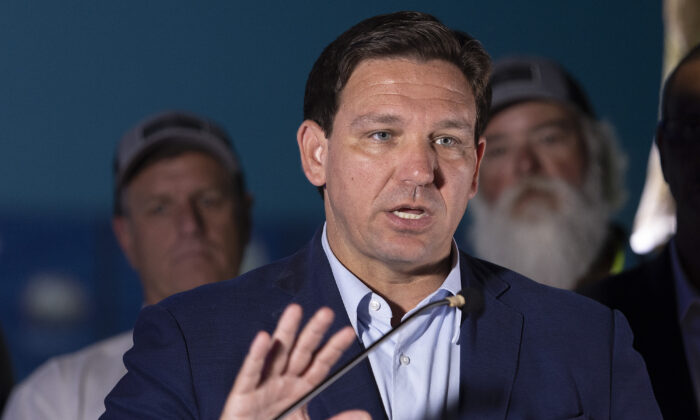 Florida Gov. Ron DeSantis said the media might have some answering to do, when asked about the recent indictment against his former political rival Andrew Gillum, who ran against the governor in the state’s 2018 gubernatorial race.

Gillum, also a former mayor of Tallahassee, was indicted with wire fraud, conspiracy, and making false statements, the Department of Justice (DOJ) announced on June 22. He solicited campaign payments and gifts from undercover FBI agents, according to the grand jury indictment.

The former mayor is also accused of acting in concert with an associate, Sharon Janet Lettman-Hicks, to defraud people through “false and fraudulent promises and representations that the funds would be used for a legitimate purpose,” according to the DOJ.

His alleged crimes occurred between 2016 and 2019, the DOJ added. Gillum was Tallahassee mayor from 2014 to 2018, and won the Democratic nomination for governor in August 2018.

Gillum has denied wronging and said the case against him was “political.” His trial is set to begin on Aug. 16.

On June 23, DeSantis was asked if he felt “vindicated” following the latest legal developments surrounding Gillum, during an unrelated press conference.

“I would ask a lot of the media that propped him up whether they have any type of mea culpa on that,” DeSantis said. “I mean, there were clearly a lot of issues there. If you looked under the hood, you saw it, but what was presented to the public, was it this guy was like the second coming.”

“I mean, never has a candidate been elevated, I think, that way by media outlets, certainly in the last 10 years or so,” the governor continued.

DeSantis went on to say that Florida wouldn’t be where it is now, had Gillum won the 2018 election.

“And I can tell you, if I had not won in 2018, this state would be in a much worse shape, and that’s not even a question,” he said. “And so we’re happy that we were able to do it, but even more happy that we’ve been able to lead and accomplish more than anyone thought we could accomplish in the state of Florida.”

In 2018, some media outlets once suggested that Gillum could be a candidate for the 2020 presidential election.

During a campaign event in Tampa in October 2018, Biden touted Gillum as  “one of the most exciting, new, young leaders in the nation.”

After Gillum won the Democratic nomination in 2018, Harris took to Twitter to praise Gillum as “a strong progressive leader and will make a great Governor of Florida.”

Days after Gillum conceded defeat to DeSantis in the 2018 race, Clinton took to Twitter to praise the former mayor for having run “an extraordinary campaign for governor, full of hope and focused on the needs and dreams of Florida families.”

“Andrew, I’m proud of you and I can’t wait to see what you do next,” Clinton wrote.

Gillum, a onetime CNN political commentator, was found inebriated in a hotel room where suspected drugs were found in 2020. According to a report from the Miami Beach Police, Gillum was found in the room “unable to communicate with officers due to his inebriated state.”

The former mayor subsequently apologized and denied using drugs. He was not charged over the incident.

“Trump really saved Florida when he pushed DeSantis past Gillum,” Posobiec wrote on Twitter. “0.4% difference in 2018 and Gillum would be governor today.”

In 2018, DeSantis defeated Gillum by a margin of 32,463 votes, with a voter turnout of more than 8 million people.