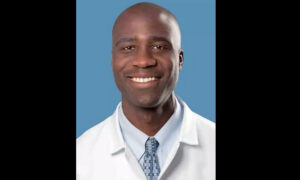 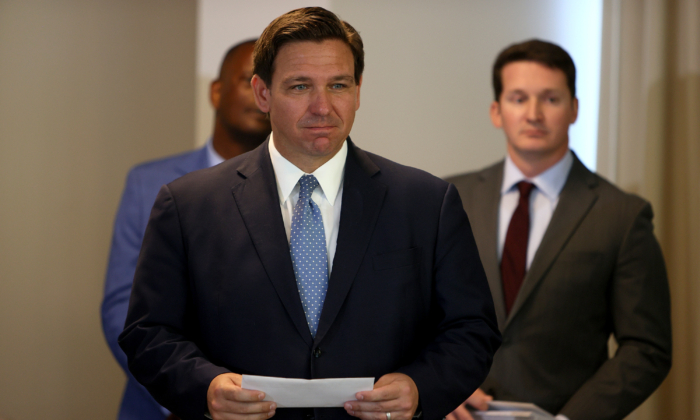 “I have faith,” DeSantis said told reporters during a news conference in St. Pete Beach. “I got faith in the big guy upstairs, and I’ve got faith in her. And I know that this is a bad break, but she’s got an awful lot to live for.”

The governor and First Lady Casey DeSantis have three children: Madison, 4, Mason, 3, and Mamie, 18 months, the first baby born in the Governor’s Mansion in more than 50 years.

Florida’s first couple met when practicing their golf swings at a driving range. She then worked for the PGA Tour as a producer and on-air host. A native of Troy, Ohio, Casey DeSantis had earned a bachelor’s in economics from the College of Charleston and was a three-time National Champion equestrian before marrying the future governor.

On Oct. 8, four days after the announcement of her diagnosis, she resigned as chair of the Florida Children and Youth Cabinet. And she may “pass the baton” to him on other projects, too, the governor said. “But she’s going to be back.”

It wasn’t pain that tipped her off that she might have a problem, and needed a screening for breast cancer, he said.

“She just had a feeling she needed to do it,” DeSantis said. “So thank God that she did.”

In its early stages, breast cancer doesn’t usually cause symptoms, according to the National Breast Cancer Foundation. The organization recommends that women ages 40 and older get a mammogram—or breast X-ray—every year.

Mammograms can detect cancerous tumors, even in the early stages, when treatment is most likely to be successful. Women who have screening mammograms have a lower chance of dying from breast cancer, according to the organization. Mammograms are considered quick, safe, and relatively painless. October is National Breast Cancer Awareness month.

Gov. DeSantis urged men and women to get cancer screenings recommended by their doctors, as they “can really, really be life-saving.”

He expressed relief that their children really aren’t aware of their mother’s struggle. And he revealed that his own mother is a breast cancer survivor.

“I was just too young” to really understand, he said. “So our kids really have no concept of what’s going on.”

Because his wife is such a healthy person overall, he said, “her view is, ‘Better me, than somebody who may not be able to deal with it.’”

“She fights, she’s tough,” he said, adding that the attitude “just shows you the type of person she is.”

“That’s why I love her,” DeSantis said. “She’s an exceptional person.”

For information about the signs and symptoms of breast cancer, visit NationalBreastCancer.org.