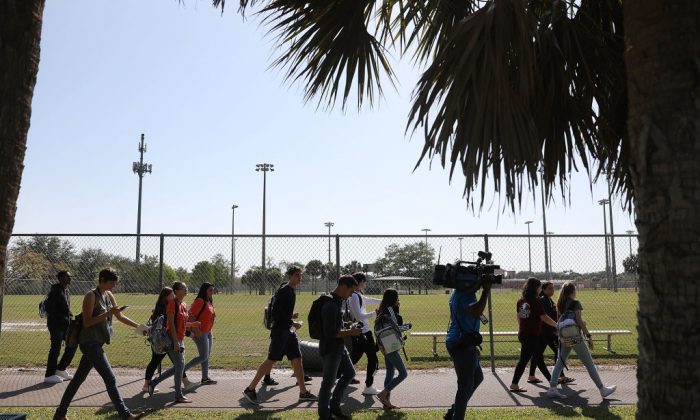 Students from Marjory Stoneman Douglas High School, where 17 classmates and teachers were killed in a mass shooting, on April 20, 2018, in Parkland, Florida. (Joe Raedle/Getty Images)
US

The bill, HB 1421, adds to Florida’s list of school safety reforms that have been legislated since the shooting at Marjory Stoneman Douglas High School on Valentine’s Day in 2018.

Florida Democrats had begun pushing for a special session on gun violence before the governor signed the bill.

In a news release, DeSantis announced that he had signed the bipartisan-supported bill which embraces a number of recommendations by the task force that was created as a result of the shooting in the Parkland high school, where 17 students and faculty lost their lives.

“Every child needs a safe and secure learning environment,” DeSantis said in a June 7 press release.

The signing also comes after the recent tragedy in an elementary school in Uvalde, Texas, where 19 children and two teachers were killed by an 18-year-old gunman.

In Florida, HB 1421 requires law enforcement officers to train in active shooter drills, school boards to enact family reunification plans for the aftermath of an evacuation, and for schools to have an 80 percent certification rate of personnel receiving mandatory youth mental health awareness training. It will go into effect on July 1.

The bill will extend the Marjory Stoneman Douglas High School Public Safety Commission until 2026 and revise their responsibilities from investigating system failures at the school and other previous mass shootings in Florida. They are also charged with recommending improvements to those systems and monitoring the implementation of school safety laws.

The bill will authorize the state’s education commissioner to enforce school safety and security compliance, permit school officers to arrest people in charter schools, and requires those officers to complete an intervention training course to improve skills to de-escalate situations on school grounds.

The bill that was passed in March during the regular session did not address gun violence or any controls on weapons and background checks as has been called for in the wake of the Uvalde Elementary school shooting as well as other recent mass shootings.

Although the bill was originally a bipartisan effort, Democrats in the Florida Legislature have asked their Republican counterparts to vote with them to convene a special session to hammer out new gun legislation.

DeSantis, at a press conference in Jacksonville on June 6, said, “I think, going back to Columbine, this has become something where these deranged psychopaths have certain targets, and some of them go to schools as a way to kind of maximize the trauma to a community. They’re very evil people.”

They look for areas where they think they’re going to be able to get away with it, the governor said. “The Buffalo shooter, for example, said, ‘You know, I’m going places where I don’t have to worry about people concealed carry or anything like that,’ because he wants, they want basically sitting ducks.”

In a past legislative session, DeSantis called for Constitutional Carry, vowing “If they get it to my desk, I’ll sign it.” He wants to accomplish this before he leaves office, he said.

Shortly after the Parkland shooting, DeSantis blamed law enforcement for not responding quickly enough and subsequently removed the Sheriff of Broward County.

“The shooter didn’t meet the quick resistance that he should have met. And you had a lot of folks that could have been held responsible and nobody had been held responsible,” DeSantis said of the 2018 shooting at the Jacksonville press conference. “And so when I came in, we decided to do something about that. We removed the Sheriff of Broward County.”
DeSantis noted in the release that the state budget has $140 million in it for mental health and $210 million for school safety.
Since taking office, the governor has addressed school security and other recommendations by the Parkland Commission and signed budgets to increase funding for mental health and school security.