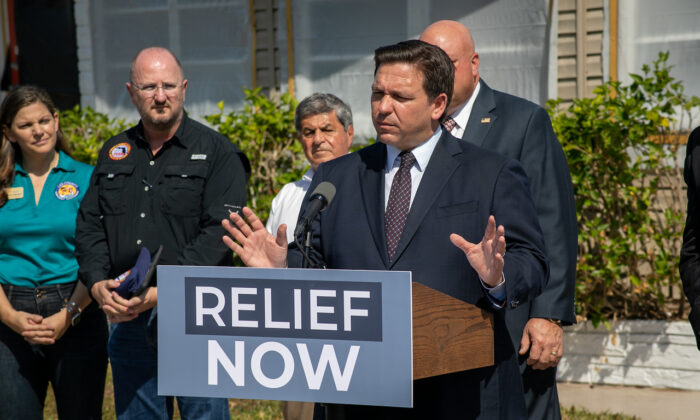 Florida Gov. Ron DeSantis addresses the media in Fort Myers, Fla., in February 2022 (Courtesy of The Governor's Office)
US

PUNTA GORDA, Fla.–Gov Ron DeSantis on June 2 signed what he called the “Freedom First” budget totaling almost $110 billion for fiscal year 2022-2023, to blunt the impact for Floridians of a “Biden-induced recession.”

“Our commitment to freedom has paid off,” he said at a press conference at The Villages. “Our responsible fiscal policies have put the state in a strong position to make the record investments needed to support growth and opportunity in spite of the reckless fiscal and monetary policies of the Biden administration.”

DeSantis said the budget was trimmed $3.1 billion with the power of the “line-item veto,” and that his veto power was used “very robustly” to put Florida in a better position, should that recession hit. Some of the cuts that were made by the governor’s veto included $20 million for two new aircraft for other state officials to use, $20 million for a new Moffitt Cancer Center and $350 million for a Lake Okeechobee water treatment project.

“We are meeting our obligations, funding key priorities and protecting the state budget against a ‘Biden-induced recession,’” DeSantis said.

The governor credited strong fiscal policies that have spurred growth and opportunities for Floridians.

The budget DeSantis signed was a 10.4 percent increase over the current budget and will go into effect July 1. DeSantis said the budget benefited from an unexpected surplus in tax revenue from a state economy on the rebound thanks in part to the governor’s refusal to lock down businesses and schools.

“We kept Florida open, protected people’s rights and saved jobs,” he said. “Florida had outpaced the nation on all economic indicators.”

The state benefited from the increase in tax revenue that boosted the state’s surplus to $20 billion that was reported in May and projections indicate that the 2022-2023 year will begin with a $16 billion surplus, DeSantis announced.

Two billion of that surplus is going to help rescue the property insurance industry that the governor signed into law last month.

The governor thanked the legislature for what they accomplished in the budget in light of what is happening on a federal level.

“There’s a fella by the name of Brandon that people talk about that we have to contend with,” DeSantis quipped. “He immediately waged war against American energy production–you see high gas prices in the United States–that’s a big reason why [we have] the most sustained inflation this country has seen in over 40 years.”

DeSantis said the country would have been better off when Biden took office if he “did nothing [rather] than what he has done so far.”

“He never takes responsibility for himself but what I would say is, you want to know why your approval ratings are in the toilet–try looking in the mirror for once.”

The governor told the crowd at the Villages that Florida is successful because Florida remained open during the pandemic.

“We kept Florida open, we protect people’s rights, we saved countless number of jobs and people’s businesses and made sure kids had the opportunity to be in school in person,” he said. “All of that meant we have outpaced the nation on virtually every indicator.”