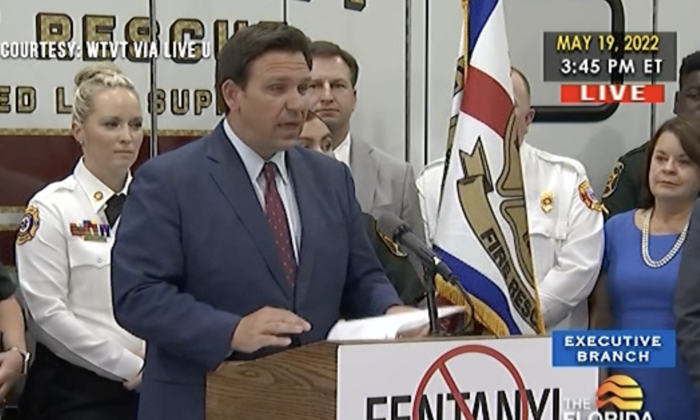 Florida Gov. Ron DeSantis addresses the media during a bill signing in Lakeland, Fla., on May 19, 2022. (WTVT via The Florida Channel/Screenshot via The Epoch Times)
US

PUNTA GORDA, Fla.–Gov. Ron DeSantis signed HB 95 on May 19, making it a capital offense for the drug dealer when a death results from the sale of fentanyl and methamphetamine and increasing penalties for trafficking.

“Someone dealing fentanyl is murdering people and they are going to go to prison in the state of Florida and that’s appropriate,” DeSantis said. With fentanyl, unlike some other drugs, “you don’t get a second chance.”

DeSantis said the leading cause of death for people 18 to 45 years of age in the United States is fentanyl. Preliminary data from Centers for Disease Control and Prevention (CDC) in 2021 indicates that fentanyl was involved in 77 percent of overdose deaths.

HB 95  will also make the distribution of methamphetamine which causes the death of a person to be felony murder, the Republican governor said at a press conference in Lakeland.

According to a press statement from the governor’s office, “HB 95 implements recommendations of the Statewide Task Force on Opioid Abuse, which was created by Governor DeSantis in 2019 to develop a statewide strategy and identify best practices to combat the opioid epidemic through education, treatment, prevention, recovery, and law enforcement.”

“One of my first actions as governor was to create the statewide Task Force on Opioid Abuse to develop a statewide strategy to combat the opioid epidemic through education, treatment prevention, recovery, and law enforcement,” he said. “This bill enhances the penalties for selling controlled substances within 1,000 feet of a substance abuse treatment facility, increases the mandatory minimum sentence for trafficking fentanyl and analogues which has impacted communities across Florida and the U.S.”

Specifically, the bill adds methamphetamine to the list of specified controlled substances which if that substance causes the death of a person; the person who distributed the controlled substance to a conviction for first-degree felony murder.  It also increases the minimum mandatory sentence for trafficking fentanyl from three years to seven years for four to 14 grams and from 15 to 20-year sentence for 14-28 grams.

“This is it; two milligrams,” Judd told attendees as he flashed pictures of what two grams looked like to the audience. “One hundred, sixteen people alone last year, died from just this small, small amount of fentanyl. This is dangerous.”

Judd went on to tell the crowd that the most “frightening” thing he has seen of late is fentanyl “disguised as an oxycodone pill.”

“This is designed to look like an M-30 and it’s not oxycodone,” he said holding up another picture of a bottle of pills that was confiscated in a Polk County drug sting. “So, they’re taking the oxycodone when they’re getting an overdose of fentanyl.”

Earlier on May 19, Sheriff Lemma stated that he was with Florida’s First Lady Casey DeSantis as she addressed a group of students in Kissimmee, speaking to them about The Facts. Your Future, her 2019 initiative designed to highlight the “dangers of youth substance abuse—especially in teens.”

“You cannot address this problem without holding the drug dealers accountable to the fullest extent of the law,” Lemma said. “Seminole County has prosecuted more than 30 drug dealers for first-degree murder for dealing deadly doses of fentanyl.”

Casey DeSantis spoke to students about the dangers of drug addiction and said that she is “impressed” with those who have the “courage to say no to societal pressures that are pushing them toward irresponsible behavior.”

“When you consider the situation in our country where fentanyl use is spiking and tragically causing far too many young people to needlessly lose their lives, now it is more important than ever for teenagers to understand the facts about substance abuse,” she said at the Kissimmee event.

Mike, a Florida parent, told the group that he lost his 23-year-old son to an overdose of fentanyl but no longer refers to his son’s death as an “overdose.”

“I refuse to call this an overdose because I truly believe that if you’re intentionally giving somebody something that you know is going to kill them,” he said as his voice cracked. “I’m going to call it murder from now on because that’s exactly what it is. It’s murder.”