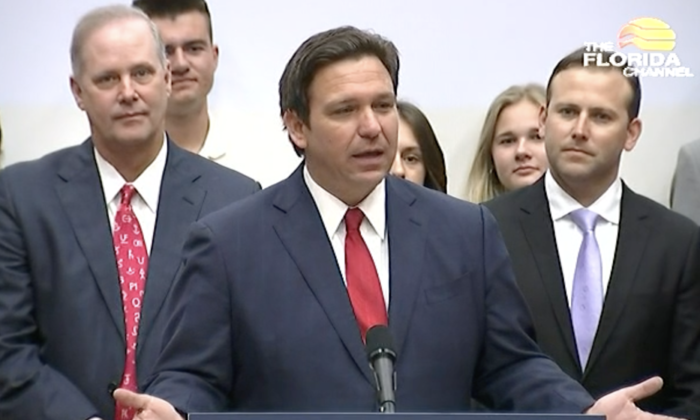 Florida Gov. Ron DeSantis holds press conference in The Villages and signs SB 7044 on April 19, 2022. (Screenshot, The Florida Channel)
US

Under the new law, which takes effect July 1, tenured faculty will be reviewed every five years by a Board of Governors of the State University System of Florida, which will consider such things as accomplishments, productivity, performance metrics. and compensation.

“Transparency and accountability is absolutely key,” DeSantis said as he signed the bill in The Villages. “We’re going to make sure that our institutions of higher education are committed to excellence, not ideology – we’re going to be even better than we have been, and we’ve been pretty doggone good over the last many years.”

The Republican governor told a boisterous crowd that Florida’s higher education institutions were ranked No. 1 in U.S. News and World Report for the last five years, but, with these reforms, he wanted to make it even better.

“It’s all about trying to make these institutions more in line with what the state’s priorities are and, frankly, the priorities of the parents throughout the state of Florida,” the governor said.

The bill sponsored by Republican Senator Manny Diaz will also remove the “stranglehold that faculty unions and accrediting agencies have had on universities and colleges,” a written statement from the governor’s office said. It also “adds common-sense transparency requirements for tuition, fees and cost of materials.”

The bill reads: “State Board of Education and Board of Governors (BOG) will identify regional accreditors that are recognized by the U.S. Department of Education (USDOE) that are best suited for each institution. Institutions must seek accreditation from identified regional accreditors and if they are denied by the regional accreditor, they may seek accreditation from any USDOE-approved accreditor that is different from their current accreditor. Prior to this legislation, accrediting agencies had a monopoly on Florida colleges and universities and were able to hold a hand over the operations of educational institutions and remove objectivity from the process.”

“Tenure was there to protect people so that they could do ideas that maybe would cause them to lose their job, or whatever, and academic freedom. I think what tenure does is [that] … it has created more of an intellectual orthodoxy—and once you’re tenured, your productivity really declines,” DeSantis said.

“The BOG will be authorized to adopt regulations for performance reviews of tenured professors to hold tenured faculty to the highest standards of accountability. These reviews will help ensure that tenured staff remain active and effective in educating Florida’s university students,” the bill said. “Previously, tenured faculty had to be retained despite repeated instances of political motivations, ineffective teaching practices and overall bad behavior in the classroom.”

Dr. Michael Poliakoff, President of the American Council of Trustees and Alumni said that the bill is the “guardianship” of the future.

“There is no doubt tenure without accountability is an invitation to abuse,” he said.

“As I go into my classes, my professors hold me to high standards, as they should—but this bill gives me the opportunity to hold them to the same high standards,” she said.

Walker, a first-generation college student, said her conservative views were sometimes “stifled” and that “woke narratives” are thought by some to be the only narratives that should be taught.

“When so many in this world, especially in academia, will put their own biased agendas over excellence, it is refreshing to see a government that applies standards to mitigate injustice,” the fourth-year history major said, calling the bill “excellent.”

Current Florida Secretary of Education Richard Corcoran, with two more weeks before he returns to the private sector, quipped that he was on his “farewell tour.”

The governor has kept his inaugural promise of making life better for the children of Florida, he said.

Corcoran also took the opportunity to address the decision on rejecting the math textbooks for reasons of inserting critical race theory (CRT) into the content of the books, which violates Florida law.

“It’s a math textbook you’re trying to teach two plus two equals four, and it’s like this whole hidden agenda of indoctrination,” he said of the books. “I don’t care how you feel when you’re doing the problem, just be able to solve it.”

He continued to predict that because of making sure CRT is not “infiltrating” the content of textbooks that Florida will “shoot to the top in all education metrics.”