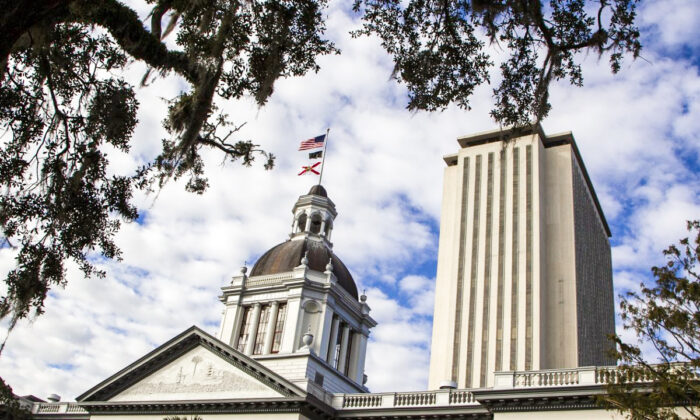 A view of the historic Old Florida State Capitol building, which sits in front of the current New Capitol, in Tallahassee, Fla., on Nov. 10, 2018. (Mark Wallheiser/Getty Images)
US

DeSantis Signals He Would Sign Bill Stopping Abortions After 15 Weeks

This legislative session could prove to be the one that transformed the abortion laws in Florida with Gov. Ron DeSantis signaling he would sign a law prohibiting terminations after 15 weeks as it passed through committee in a 12-6 party line vote on Jan. 19.

“I am supportive of 15 weeks,” DeSantis said.

“I think that’s very reasonable and very consistent with being supportive of protecting life. We’ll work with them as they kind of get through that process.

“I think that’ll be something we’ll be able to sign and I think a lot of people would be happy with that.”

Abortion bans have failed over the years in Florida with some never making it out of committee.  However one law—HB 146, the Fetal and Infant Mortality Reduction Act—has the promise of making it to the governor’s desk and he has indicated he would sign it.

It does not provide exceptions for rape and incest, but does allow for a fetus that is found to have a “fatal fetal abnormality.” The condition would have to be certified by two doctors.

The bill’s sponsor Rep. Erin Grall said that abortion should be limited because of the medical changes that have taken place since the 1973 Roe v. Wade decision.

“This is not an abortion ban,” Grall told reporters on Jan. 19. “This is about 15 weeks. This is about having all of your available options at the ready for you for 15 weeks.”

With the majority of conservative justices sitting on the U.S. Supreme Court, the landmark Roe v. Wade is on the verge of being overturned and Florida pro-lifers see 2022 as the year to act.

Roe v. Wade was a 1973 case that “established a woman’s right to terminate her pregnancy before the fetus is viable at around 24 weeks.”

State Sen. Kelli Stargel has long been an advocate for the unborn and has sponsored a 15 week abortion ban on the senate side.

“Abortion takes of the life of an innocent, unborn child. Throughout my time in the Legislature, I have prioritized pro-life legislation that ensures our state government does all we can to protect the lives of innocent children and support parents who choose life,” Stargel said in an email to The Epoch Times.

Stargel went on to say that abortion hits close to home for her as she was a teenage mother.

“Having once been a scared teenage mother myself, I understand the turmoil of a woman facing an unplanned pregnancy,” she continued. “Women and children deserve better than abortion–while laws cannot change hearts, they are a clear indication of what we value as a state. Florida is a state that values life and I look forward to working with my colleagues on legislation to further protect the innocent lives ended by abortion.”

HB 146 closely mirrors that of a Mississippi law that the U.S. Supreme Court heard arguments on in December.

Mississippi’s bid to revive its 15-week ban on abortions, that the lower courts had blocked, is being considered and expected to have a ruling in the spring of 2022.  If they rule in favor it will pave the way for states such as Florida to successfully defend abortion bans in court.

Florida House speaker Chris Sprowls, a Republican said that the bill has benefits for “young mothers as well as babies” taking maternal health care into consideration.

“Last year this Florida House led a multi-100-million-dollar effort to expand the health care of maternal mothers from two months, which was set in 1976, to 12 months making sure they have that health care, making sure we’re looking after them and their baby,” Sprowls told reporters after the state of the state address on Jan. 11.

“And that includes our commitment to life issues and making sure that we are protecting the sanctity of human life–that’s what this bill is about.”

Sprowls said that the 15-week cap on abortions was by design.

“The reason we picked 15 weeks as opposed to something else was because that is the case that is currently in front of the U.S. Supreme Court,” he continued. “If the court were to allow the Mississippi case to stand at 15 weeks, then our law would be able to stand.”

Abortion in the United States has been a politically volatile issue with opponents concerned about preserving life from conception and advocates standing up for a woman’s bodily autonomy.

Politicians check the pulse of their constituents to see how the majority falls on the side of the issue and vote accordingly.

With 2022 being an election year Republican politicians who have the majority in Tallahassee, Fla., will face their constituents at the polls in November with abortion being at the forefront of issues important to their conservative base and how they vote could decide their fate.

Rep. Anna Eskamani, a Democrat, and a former Planned Parenthood employee, called the bill “extreme anti-abortion legislation” and tweeted,  “Florida’s 15 week abortion ban has been filed—and of course they’re trying to brand it as not being an abortion ban.

“That’s because Republican members know that abortion bans are extreme and not supported by the majority of our state or country.”

However Florida’s Constitution provides privacy protections that have been interpreted by courts in the past as protecting a right to an abortion.

The Florida Supreme Court is most conservative with three judges appointed by DeSantis.

Agency for Health Care Administration reports that during 2021 in Florida, 68,449 abortions were performed with a little more than 51,000 that were coded as “elective”, while 97 were for rape, eight for incest and almost 15,000 were for “social or economic reasons.”

A vast majority being performed in the first trimester of pregnancy.

Other abortion bills under consideration:

SB 628—Abortion Clinic Regulations: “Deleting a specified timeframe in which certain information must be provided to a pregnant woman before a termination of pregnancy may be performed; deleting provisions prohibiting state agencies, local governmental entities, and Medicaid managed care plans from expending funds for the benefit of, paying funds to, or initiating or renewing contracts with certain organizations that perform abortions; deleting a requirement that the Agency for Health Care Administration inspect a specified percentage of abortion clinic patient records as a component of license inspections, etc.”