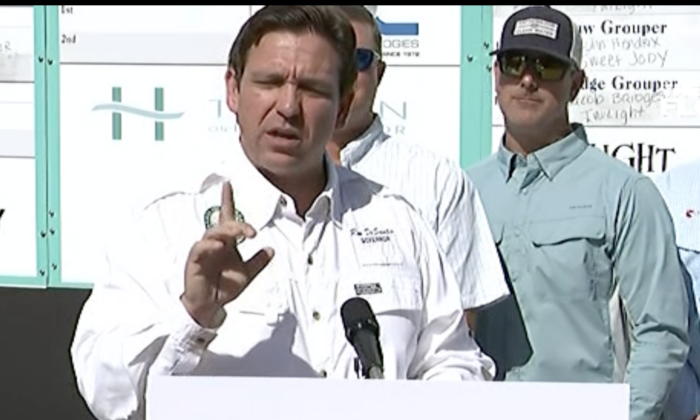 The Republican governor made the announcement on May 2 at the Jacksonville Zoo and Gardens. The funding represents a $17 million increase over last year.

“We are putting our money where our mouth is with this record funding,” DeSantis said, standing with his 5-year-old daughter, Madison, in front of a tank that housed two manatees. “This is one part of a broader effort that we’re making in Florida to support restoration projects and water quality projects.”

There were 1,100 reported manatee deaths in the state last year, according to a report released by Florida Fish and Wildlife Conservation Commission (FWC).

After spending half a century on the endangered list, in 2017, the animals were designated as threatened. However, the U.S. Fish and Wildlife Service website indicated that by the fall of 2022 that designation may be changed back to endangered because the greatest number of manatee deaths were attributed to starvation instead of watercraft injuries according to FWC necropsy data. The data showed that many of the starving animals have resorted to ingesting sand off the seafloor in an attempt to thrive.

As each winter in Florida approaches, ocean temperatures reach, on average, a chilly 68 degrees, causing the manatees to make their way in large numbers to inland waterways, warmer estuaries like the Indian River Lagoon (IRL). But this place of refuge has become a place of starvation for the friendly mascots of Florida. FWC said animals “normally” will move on when their food sources diminish, but not the manatees. Much like humans, they are “territorial and predictable.”

The manatees’ primary food source, seagrass, has been nearly wiped out by pollution such as failing septic systems, urban sprawl, and fertilizer runoff that causes damaging nutrients to drain estuaries of the oxygen necessary for plant life to prosper. In order to find solutions to aid starving mammals, in 2021, FWC partnered with the U.S. Fish and Wildlife Service (USFWS), working together to combat what they call an “Unusual Mortality Event. (UME). In 2023, $20 million will go towards restoration projects and feeding programs.

Mid-January of this year brought record low temperatures to the Sunshine State, and scientists and researchers decided to break their own rules by hand-feeding the manatees heads of lettuce to save them from starvation.

The beginning of the program was bleak as the manatees, accustomed to submerged seagrass, did not recognize the floating heads of lettuce as a viable food source. However, FWC researchers and scientists were encouraged during the last days of January, as the lumbering herbivores began to eat the lettuce.

Scott Calleson, an Ecological Services officer in the Florida office of the USFWS, said 160,000 pounds of lettuce has been provided to the manatees with “very little waste,” with an estimated 25,000 to 40,000 pounds more to go before the end of the program for the winter. He said only $250 has been spent on the lettuce program, which has run “mostly off of public donations.”

The feeding program has wound down for the winter as the manatees have migrated north, but Calleson said they would continue to feed them next winter.

“The effort was designed as a winter intervention,” Calleson said. “There was very little food to get them through the winter–we want them to fan out so they can find vegetation in other areas. Our intent at this point is to watch the weather, and once we’re comfortable that we’re through the winter, we will stop probably in the next two weeks and then monitor them as we normally would.”

In a press release from the governor’s office, the more than $30 million dedicated to the manatees includes $20 million to “enhance and expand the network of manatee acute-care facilities, restore access to Florida’s natural springs, provide habitat restoration in manatee concentrated areas, expand manatee rescue and recovery efforts, and implement pilot projects like the supplemental feeding that took place this past winter.”

Twelve new positions will be created with $5.3 million and will expand FWC manatee mortality and response efforts, while $160,000 will go toward aerial surveys, and $4.7 million will go to support manatee acute-care facilities and research, rescue, and conservation activities.

DeSantis, in his 2018 inaugural speech as governor, addressed the environment and vowed to take “bold action” to protect and enhance Florida’s water quality by signing Executive Order 19-12, which began the first part of the Wastewater Grant Program awards.  In November 2021, he gave an additional $481 million for water quality improvement funds across the state. The Wastewater Grant Program was created in the Clean Waterways Act, which provided a funding source for the program.

FWC reminded boaters to remain on the lookout for manatees as they migrate north for the summer and said the best way for Floridians to help manatees is to report distressed, dead, or tagged animals by calling the state Wildlife Alert Hotline at 1-888-404-3922.