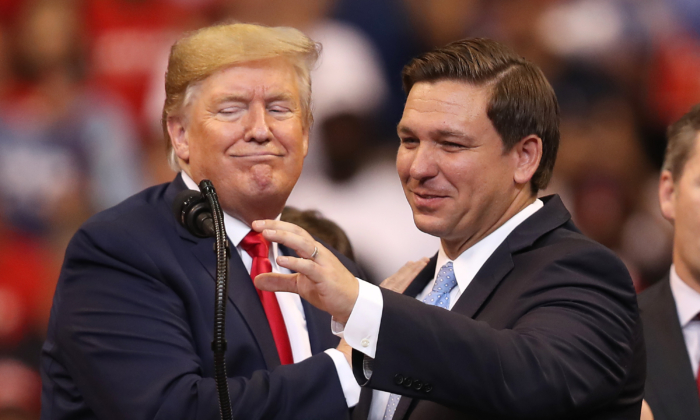 After Florida Gov. Ron DeSantis won overwhelmingly in Florida, it sparked betting markets to tip the 2024 race in his favor past former President Donald Trump.

“Incredible shift in the odds for President in 2024! @RonDeSantisFL overtook Trump for the first time,” Maxim Lott, co-founder of the website Election Betting Odds, wrote on Twitter.

Two of the sites Election Betting Odds uses, Betfair and Smarkets, showed DeSantis with a substantial lead over Trump. The Florida governor was 27.3 percent as compared with Trump at 18.4 percent.

The Florida governor overtook Trump “because DeSantis just won a swing state with a crazy 20 percent margin. For comparison, he won his race in 2018 by just 0.4 percent,” Lott added on Twitter.

President Joe Biden remains below both Republicans in the 2024 presidential odds at 16.5 percent, according to Election Betting Odds. California Gov. Gavin Newsom, a Democrat, stood at 5.9 percent, and Vice President Kamala Harris was at 5.4 percent.

Another betting website, PredictIt, showed DeSantis had a slimmer lead at around 31 percent and Trump at around 28 percent.

Before the Tuesday midterm elections, Trump issued warnings to DeSantis about possibly running in 2024. On Monday, the former president said he would make an announcement next week, sparking speculation he may launch his presidential campaign.

“If he did run, I will tell you things about him that won’t be very flattering. I know more about him than anybody other than perhaps his wife, who is really running his campaign,” Trump told Fox News in an interview on Monday.

DeSantis, meanwhile, has not issued any public responses to Trump. He also has not confirmed whether he will run for president in 2024.

As for Biden, the president told reporters that he will make a decision by early 2023.

“Our intention is to run again, that’s been our intention, regardless of what the outcome of this election was,” Biden said Wednesday at the White House.

Trump, who took an active role in recruiting Republican candidates, had mixed results. He notched a victory in Ohio, where “Hillbilly Elegy” author J.D. Vance won a Senate seat to keep it in Republican hands. But Doug Mastriano, another Trump ally, was defeated in the Pennsylvania governor’s race.

“While in certain ways yesterday’s election was somewhat disappointing, from my personal standpoint it was a very big victory – 219 WINS and 16 Losses in the General – Who has ever done better than that?” he wrote on his social media platform Truth Social.

The party that occupies the White House almost always loses seats in elections midway through a president’s first four-year term, and Biden has struggled with low public approval.

“In this climate we should have done better,” said Rob Jesmer, a former head of the Republicans’ Senate campaign arm.