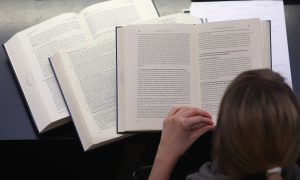 DeSantis Office: Over Half of Those Seeking Lifesaving COVID-19 Treatment in South Florida Fully Vaccinated

A spokesperson for Florida Gov. Ron DeSantis’s office said that more than half of those who are seeking monoclonal antibody treatment in the south of Florida are “fully vaccinated” individuals amid supply issues.

“More than half the patients getting the monoclonal antibody treatment in south Florida are fully vaccinated,” DeSantis spokeswoman Christina Pushaw wrote in response to a comment on Twitter that suggested that only unvaccinated people are the reason why there is a significant demand for monoclonal antibodies.

Florida, she wrote hours earlier, “is above average in vaccination rate” and that “more than half of the patients in south Florida getting monoclonal antibody treatment are vaccinated and have breakthrough infections. Vaccinated or unvaccinated -Denying treatment to Covid patients is wrong.”

Monoclonal antibodies are engineered immune system proteins that boost an immune response against an infection.

Earlier this week, the White House and Department of Health and Human Services (HHS) announced plans to control the U.S. monoclonal antibody supply due to distribution issues. According to HHS’s website in a Sept. 13 update, the agency “will determine the weekly amount of mAb products each state and territory receives based on COVID-19 case burden and [monoclonal antibody treatment] utilization.”

A spokesperson for HHS told CNN that Florida, Texas, Mississippi, Tennessee, Alabama, Georgia, and Louisiana are using 70 percent of the supply of the drug.

“Given this reality, we must work to ensure our supply of these life-saving therapies remains available for all states and territories, not just some,” the HHS spokesperson said, adding that a new system “will help maintain equitable distribution, both geographically and temporally, across the country … providing states and territories with consistent, fairly-distributed supply over the coming weeks.”

Before the change, states and hospitals could purchase the antibodies on their own without going through the federal government.

“More than 50 percent of the monoclonal antibodies that had been used in Florida were going to be reduced,” DeSantis said on Thursday, adding that “there’s going to be a huge disruption, and patients are going to suffer as a result of this.”

On Thursday, DeSantis’s office said the state would deal directly with GlaxoSmithKline, a maker of monoclonal antibody infusion treatments.

“The Biden administration and their allies in media have claimed that Florida is using too much monoclonal treatment because of a low vaccination rate,” Pushaw told The Epoch Times on Thursday, “and Biden has lashed out at Governor DeSantis for opposing the tyrannical federal vaccine mandate.”