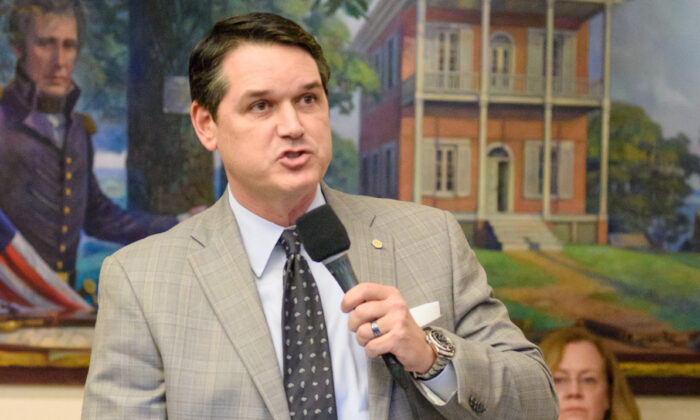 Florida State Rep. Cord Byrd on the floor of the House. (Courtesy, The Florida House)
News

“Cord Byrd has been an ally of freedom and democracy in the Florida Legislature, and I am confident he will carry that mission forward as Secretary of State,” the governor said on May 16, at a press conference in Sanford.

The announcement of Byrd’s appointment came on May 13, one day after former Secretary of State Laurel Lee submitted her resignation, effective May 16, and a few short months before the midterm elections.  Byrd, an attorney, will be charged with investigating voter fraud, as the state is involved in a legal challenge to a new congressional map, reportedly drawn by DeSantis.

“As Secretary of State, I will make sure Florida continues to have secure elections and that we protect the freedom of our citizens in the face of big-tech censorship and ever-growing cybersecurity threats,” Byrd said in a written statement.

As a member of the state House of Representatives since 2016, Byrd served on the Public Integrity and Elections Committee, where he was vice-chair for two years.

A statement from the governor’s office highlighted some of the bills Byrd sponsored, including legislation banning sanctuary cities in Florida and a bill enhancing the state’s cybersecurity infrastructure.

However, not all are happy with the governor’s pick.

“Florida’s top elections official should be a consensus builder whose sole focus is running free and fair elections for every citizen of our state. Cord Byrd is not that person,” Nixon said in a release. “He is unqualified in both his credentials and his temperament, has proved time and again he will put partisanship ahead of good policy and is unfit to lead the elections department of a diverse state of more than 20 million people.”

Also, the state’s Commissioner of Agriculture Nikki Fried, a Democratic gubernatorial hopeful,  said Byrd will only serve DeSantis and not the people of Florida.

“The Secretary of State should serve the people of Florida, but Cord Byrd today was appointed because he will serve only Ron DeSantis,” Fried said in a Tweet on May 12. “This reckless appointment should make every Floridian question Ron DeSantis’ commitment to free, fair, and democratic elections.”

The governor answered his critics at the Sanford press briefing, defending his choice for Secretary of State.

“Cord Byrd is very, very strong—we are not going to have to worry in Florida about ballot harvesting—he will make sure that the elections are run efficiently and transparently,” DeSantis told reporters. “We’re certainly not going to allow political operatives to harvest all these votes and then dump them somewhere, so I think that we have a great framework in place.”

“We’re going to be off to the races I think very quickly, so he’s going to do a really good job and I’m excited for him to get to work,” he said.

After accepting the resignation of former Florida Secretary of State Laurel Lee, DeSantis wasted no time in announcing his new pick for the position. Lee announced her resignation on May 12, effective May 16, and it has been reported that she may be eyeing a run for Congress.