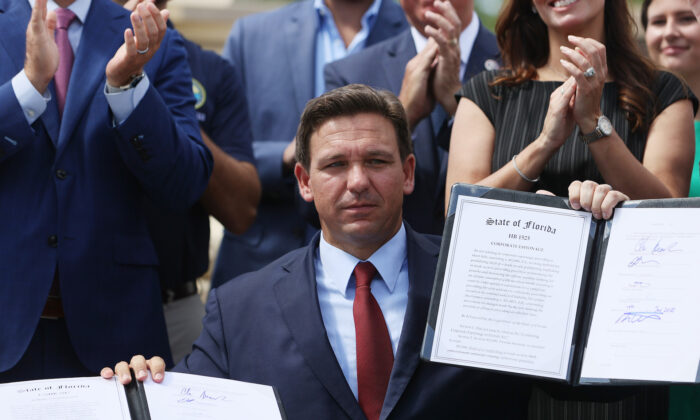 Florida Gov. Ron DeSantis said on Dec. 2 that he will be reinstating the Florida State Guard and will be seeking $3.5 million in the budget to do it.

The state guard was formed in 1941 and filled in for the Florida National Guard troops when they were deployed during World War II.

The governor said he wanted “to make sure we have the flexibility—and the ability needed—to respond to events in our state in the most effective way possible.”

He added that will require Florida to have access to, and use of, support in ways that don’t require the federal government.

The state guard would answer to the governor with no federal deployment, or missions, and would receive no federal dollars.

It will operate as a totally volunteer force of about 200 members.

They will assist the National Guard during natural disasters, such as hurricanes, and any other state-specific emergencies.

The state funds will go to training and equipment.

“We want to be able to have a quick response capability and re-establishing the Florida State Guard will allow civilians from all over the state to be trained in the best emergency response techniques, and have the ability to mobilize very, very quickly.”

He said he is recommending more than $100 million for the organization to have the “means to carry out their missions.”

That will include $87.5 million to expand the guard’s Readiness Center in Miramar, build three armories; $8.9 million for armory maintenance; $2.2 million for the guard’s counterdrug program; $5.1 million to support members seeking higher education; and $12.2 million in scholarships for families of deceased, or disabled, veterans.

DeSantis is a Navy veteran and said Florida is a “veteran friendly state.”

“We are proud of our veterans and active-duty military members and proud of what our communities do to support them,” DeSantis said.

Also in the governor’s budget he will be asking for funds for law enforcement, education, Everglades restoration, and water quality projects.

Democrat, Niki Fried who is running against DeSantis in the next governor’s race, took to Twitter to voice her displeasure with DeSantis’ measure saying that “Florida doesn’t need a paramilitary force that only answers to Gov. Ron DeSantis.”

“Millions of Floridians know what it’s like to live under regimes like this — and came to our state to escape them. This must be stopped.”

DeSantis’ press secretary, Christina Pushaw reacted with a tweet of her own.

“Almost 2 dozen other states, including California, have a State Guard to assist with emergencies,” Pushaw said. “Also, maybe ease up on scaremongering about ‘paramilitaries’ while you support FARC (Revolutionary Armed Forces of Columbia).”