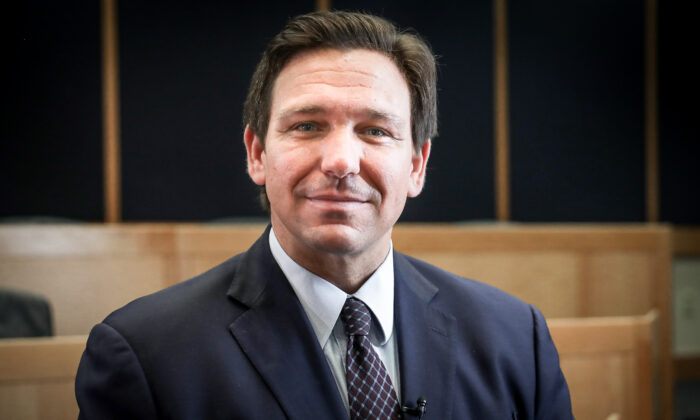 Florida Gov. Ron DeSantis during an interview with The Epoch Times at Florida International University in Miami on May 24, 2021.(Samira Bouaou/The Epoch Times)
Policies & Impacts

As Florida Gov. Ron DeSantis wrapped up a press conference in Ponte Vedra Beach on Thursday, he floated the possibility that state lawmakers might repeal the 1967 Reedy Creek Improvement Act in response to Disney’s ongoing opposition to the recently signed “Parental Rights in Education” law, dubbed by liberal opponents of the measure as the “Don’t Say Gay” bill.

The 1967 Reedy Creek Improvement District (RCID)—drafted by the Florida Legislature in cooperation with Walt Disney World and signed into law by Republican Gov. Claude Kirk—effectively created two municipal-style governments, Bay Creek and Reedy Creek, to regulate the Lake Buena Vista land where the Walt Disney World Resort operates. Through the RCID, Disney operates its own fire protection, security services, utilities, and planning. Its Board of Supervisors is selected by landowners surrounding the 38.5-square-mile property, effectively allowing Disney to operate as its own government. If the RCID is repealed, Disney’s property would suddenly be under the complete authority of Orange and Osceola counties.

The announcement came as another installment in the ongoing feud between Disney and DeSantis since the governor signed the bill into law. After facing pressure from LGBTQ communities and staff for his silence, Disney CEO Bob Chapek issued a statement to his employees on March 11, apologizing for not being a “stronger ally” to them, saying the bill represents “yet another challenge to basic human rights.” Chapek then announced Disney would immediately halt all political donations in Florida.

On March 30, Florida Rep. Joe Harding, the Republican lawmaker who sponsored the bill, announced he is returning the $3,126 he had received in political donations associated with Disney.

Disney Corporation issued a March 28 statement vowing that its new goal was “for this law to be repealed by the legislature or struck down in the courts,” promising to support organizations working to make such a thing happen.

DeSantis said the possible repeal would not be entirely retaliatory in response to Disney’s behavior, but rather made as part of a larger effort to strip Disney of what he called “special privileges.”

“Yesterday was the 2nd meeting in a week w/ fellow legislators to discuss a repeal of the 1967 Reedy Creek Improvement Act, which allows Disney to act as its own government,” Roach tweeted. “If Disney wants to embrace woke ideology, it seems fitting that they should be regulated by Orange County.”

The Parental Rights in Education law, which does not contain the word “gay,” prohibits classroom instruction on sexual orientation in kindergarten through third grade.