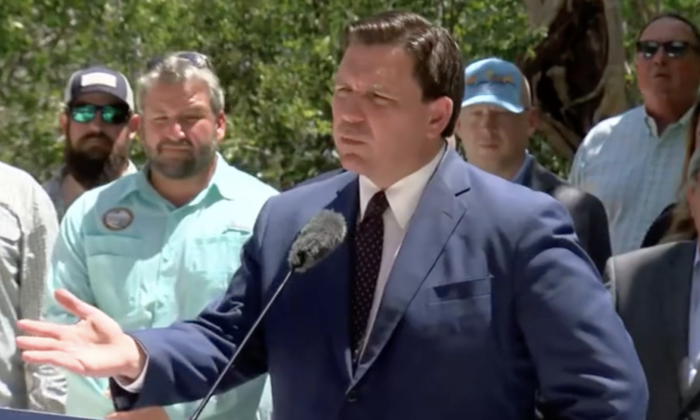 Florida's Gov. Ron DeSantis at a press conference in Lee County on May 3, 2022. (Screenshot/The Epoch Times)
US

DeSantis: Florida Is Ready if ‘Biden Plunges US Into a Recession’

Florida’s Gov. Ron DeSantis said on May 3 he is concerned about the national economy as he fears President Joe Biden’s policies will “plunge the United States into a recession.”

And DeSantis said that while inflation continues to rise with an upsurge in prices of goods, Florida’s economy is looking good.

The comments came during a press conference where the governor presented a $20 million check to Lee County for flood control and other water management projects.

“It’s our current estimate that the state of Florida brought in about $760 million above estimate,” he said.

DeSantis said that this increased the surplus that has been built throughout the fiscal year, which ends on June 1. Florida is expected to have $20 billion in reserves, he said.

“It’s important that we govern [our money] that way because I think it’s very likely that Biden is going to plunge this country into a recession.

“Florida has been doing well, and we’re happy about that,” but the governor said there are inflationary headwinds, particularly with “the Fed raising interest rates” and market uncertainties.

“There is a possibility of seeing a downturn and unfortunately I think that downturn will be precipitated by bad policy coming out of Washington.”

Even though DeSantis is concerned about inflation and a looming recession, he said the state would be “minimally impacted” because of the combination of the reserves and the preservation of a low tax rate.

“We’re built for the long haul,” he said. “We have no [state] income tax, [a] very low tax burden, but there’s nothing in the foreseeable future that would change that trajectory—it’s important that we’ve governed that way.”

Although DeSantis said he hopes a recession does not happen, he added Florida is ready to deal with it.

“I think prudent statesmanship is to be prepared in case something like that does happen,” he continued. “We have the reserves ready; we would not miss a beat when meeting our priorities like education, water resources, and infrastructure.”

After the March inflation report was made public, Florida’s Chief Financial Officer Jimmy Patronis said he shared DeSantis’ concerns about the U.S. economy as the country saw the highest rate of inflation in 40 years at 8.5 percent.

The governor said the real rate was actually “higher than that” when the rising costs of gasoline and other “everyday staples” were factored in.

The March report showed the highest rises occurred in gasoline, housing, and food. Gas rose as much as 18.9 percent within a month bringing the year-over-year price increase to 48 percent.

“As the Fed is expected to increase interest rates, major banks are also beginning to think that a recession is a real possibility,” Patronis said in a written statement.

“I have always believed in hoping for the best while preparing for the worst, and if our country is about to enter a recession, Florida needs to be prepared to weather this storm.”

The governor has indicated he is willing to “line-item veto” things that he thinks are not prudent to the budget and “what is in the best interest of Floridians.”

Florida has taken several measures to combat inflation in the proposed state budget, which DeSantis has yet to sign, including a gas tax holiday as well as other cost-control measures.

Patronis said he hopes the governor “will use his veto pen” as it “will be an important tool in protecting critical services for hard times.”