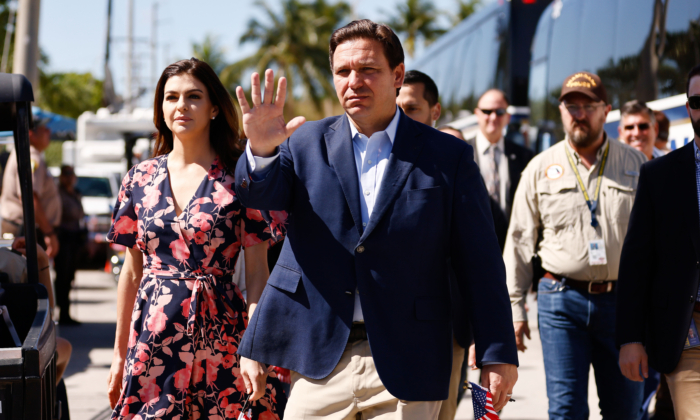 Florida Gov. Ron DeSantis and his wife, Casey, arrive to visit a memorial to those missing outside the 12-story Champlain Towers South condo building that partially collapsed on July 03, 2021 in Surfside, Florida. Over one hundred people are being reported as missing as the search-and-rescue effort continues. (Photo by Michael Reaves/Getty Images)
US News

PUNTA GORDA, Fla.–Florida Gov. Ron DeSantis (R), along with a delegation of state and federal lawmakers, assembled at the edge of the Florida Everglades on Jan. 31 to express their disappointment in the Biden administration’s failure to allocate funding to advance the Everglades Agricultural Area (EAA).

The governor said that while the state is “doing its part” in reducing harmful discharges from Lake Okeechobee into South Florida rivers and estuaries, the Biden administration had failed to include additional funding in the upcoming presidential budget for the EAA reservoir, which DeSantis called “the crown jewel” for restoring the Everglades.

“The Biden administration failed to dedicate any of the recently passed $1.2 trillion infrastructure funding to the EAA reservoir, not one dime going to this vital project,” DeSantis said. “We’re going to keep rallying to make sure that we get the support we need from the federal government. They’ve said they would support it, and so now’s the time to do it, but we want it done in a manageable time.”

For the past few months, the governor has crisscrossed the state allocating funds for environmental and water quality projects.  Some he has had to revisit because of inflation, he said.

Sen. Marco Rubio (R-Fla.), who was part of the delegation, said the Everglades funding has been a “state and federal partnership from the beginning,” but has “fallen off the grid” in terms of priorities in Washington, D.C.  The restoration project is not just one project, he explained. “It is a suite of projects that build upon one another.”

“It is one of the single most important things we can do for the future,” Rubio told reporters. “We just need to keep pushing forward to make sure that the federal partnership follows the plan as outlined–that it’s sufficiently funded, and when opportunities present itself to accelerate that funding–and that it doesn’t have the sort of drop-offs we experienced for over a decade and a half.”

U.S. Congressman Brian Mast said DeSantis “does everything strategically,” and that by building the reservoir in the Everglades it can help both coasts in “one swoop.”  However, he sees the lack of funding from the federal government as political.

“The governor said this is a crown jewel for the environment for the state of Florida,” Mast said. “That’s exactly why you’re not seeing one dollar go to it … that’s the Biden administration sending a middle finger over to Florida.”

The EAA reservoir is a vital component to the Comprehensive Everglades Restoration Plan (CERP), because it would decrease the amount of polluted water released from Lake Okeechobee, which is said to receive farm fertilizer runoff, wastewater from failing septic systems, and storm-water runoff.

The flow from the lake, when released, flushes east and west, causing toxic algae blooms that have killed fish, sea mammals, birds, and seagrass.  The proposed project would cleanse the water before reaching the Everglades. The plan includes a combination of canals and storm-water treatment areas (STSs) along with the reservoir.

Originally, the reservoir concept was part of a federal plan to restore the Everglades in 2000.  However, as recently as 2020, the South Florida Water Management District (SFWMD) began its part of the project, a 6,500-acre wetland that is designed to clean stormwater from Lake Okeechobee, making it acceptable for release into the Everglades. The project is scheduled to be completed in 2023.

The U.S. Army Corps of Engineers is tasked with building the 10,500-acre reservoir, surrounded by 37-foot walls, said DeSantis, adding that it is still in the planning stage.  Finalized in September 2021, the $80 million contract for building the roads and canals near the reservoir has not broken ground, and can take eight to nine years to build, according to Drew Bartlett, SFWMD executive director.

The remarks made by the Republican delegation at the press briefing brought criticism from Florida Democrats.  In a written statement by Reps. Lois Frankel (D-Fla.) and Debbie Wasserman Schultz (D-Fla.), described the Republicans as “hypocritical” for complaining about the lack of funding for Everglades restoration.

“Restoring the Everglades is a deeply complex, comprehensive plan, and each project we’re able to complete is a monumental win for the millions of Floridians, and hundreds of endangered plants and animal species that rely on this ecosystem. It’s beyond hypocritical for the Republican Members who voted against this bill to turn around and complain about this historic investment. Their lack of graciousness is an embarrassment to our state,” Frankel was quoted in the statement.

Since DeSantis took office in 2019,  43 restoration projects for the Everglades have broken ground, hit a major milestone, or finished construction, the governor’s office said in a press release.

“Recently, the Biden administration announced a $1.1 billion one-time investment for Everglades restoration, but the funding was dedicated to other projects that, while part of the important work to restore the Everglades, will not help to meaningfully reduce harmful discharges from Lake Okeechobee,” the release continued.

The governor has requested that the Biden administration include in the Fiscal Year 2023 budget $725 million to go towards the Everglades restoration.