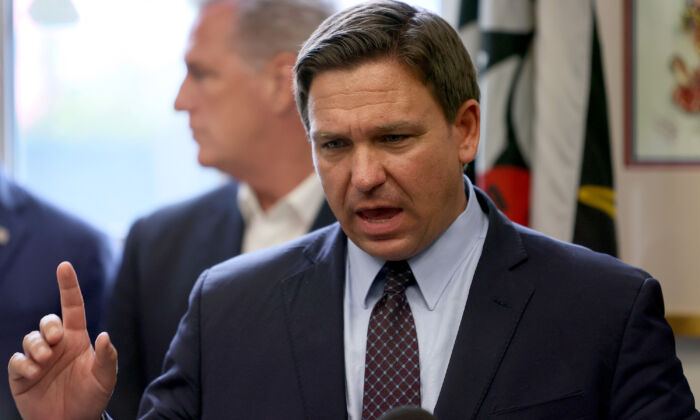 Florida Gov. Ron DeSantis has called President Joe Biden’s Thursday campaign speech “one of the most disgusting speeches” an American president has ever delivered, in which the 79-year-old commander-in-chief described “MAGA forces” as a threat to the nation.

“It was one of the most disgusting speeches an American president has ever given,” DeSantis said Friday during an appearance on Fox News’ “The Ingraham Angle,” after Biden described supporters of former President Donald Trump as “extremists” the previous day.

“He ran as being a unifier and he’s basically saying to the vast majority of the country that disapproves of him that they’re effectively a threat to the republic,” DeSantis said during the show.

It came after Biden labeled on Aug. 25 MAGA, or “Make America Great Again,” as “semi-fascism,” although the president walked back his attacks Friday morning, saying he doesn’t consider “any Trump supporter a threat” but those who attack democracy.

“He dodders. He lashes out. But, at the end of the day, his policies are why there’s so much opposition to him,” DeSantis continued, before detailing Biden policies on the border crisis, domestic oil production, and inflation that have “left wreckage in his wake.”

“He came in and he opened the border and we’ve seen what a disaster that’s been. He kneecapped American energy. We’ve seen how that’s hurt millions and millions of people across our country,” the governor said. “They’ve inflated the currency. We have one of the worst inflations we’ve had in over 40 years,” he added, calling the president “the American Nero.”

Biden’s fresh campaign-style speech in Philadelphia was seeking to rally his base in a bid to “fend off a real butt-whipping this November,” claimed DeSantis, with the potential for Pennsylvania’s governorship, three House seats, and a U.S. Senate seat to be won by GOP candidates.

“Make sure everybody knows how his policies have contributed to the mess we’re in, and then articulate what you will do to address things like the border, like crime, like inflation. If you do that, I think Republicans are going to win both chambers. And I think it’ll be a really good night,” he said.

Republicans have torn into the Sept. 2 remarks while Trump took to his Truth Social account the same night and bashed Biden as being either “insane, or suffering from late stage dementia.”

Biden’s Thursday presence in front of a glowing deep red backdrop with two Marines guarding in the background also generated a great deal of backlash.