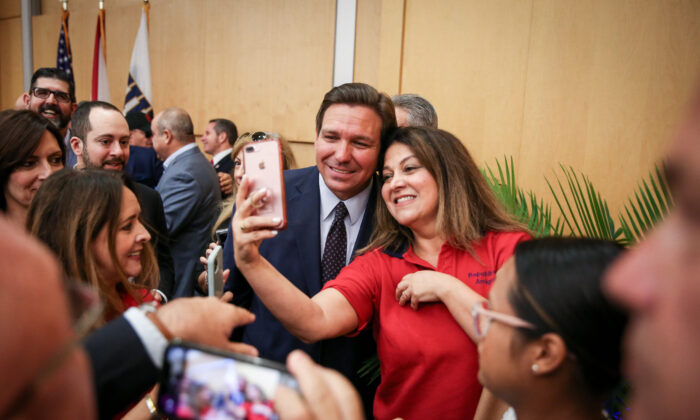 DeSantis discussed on Fox News the Sunshine State’s stance regarding COVID-19 measures and its focus on the constitutional rights of Floridians.

As for the Omicron coronavirus variant, a mild but fast-spreading variant of the CCP (Chinese Communist Party) virus, DeSantis said that when compared to the Delta variant, “Omicron has not shown to produce the same level of hospitalizations.”

“The numbers of South Africa were, by and large, very encouraging and didn’t justify the hysteria that you saw by lots of folks in corporate media,” he said.

DeSantis then talked about the COVID-19 pandemic and lockdowns, which have turned into massive impediments that have affected the daily lives of the majority of Americans.

“I cannot believe that something that started with ’15 days to slow the spread,’ now, almost two years later, you’re seeing lockdowns and closures,” he said, noting that some places have mask and vaccine mandates, but are still locked down because the number of cases keeps rising.

There has been only one death attributed to the Omicron variant in the United States so far.

Florida has largely supported early treatments for COVID-19, including monoclonal antibody treatments. DeSantis said hospitalization rates in the state were relatively low compared to other parts of the country because of these monoclonal clinics.

The Occupational Safety and Health Administration (OSHA) mandate requiring all private businesses with more than 100 employees to get vaccinated is “a terrible decision,” DeSantis said.

“Floridians are able to opt out of these types of mandates. The OSHA mandate must not be allowed to stand, on a legal and constitutional standpoint. They reached back decades and found some statute and are using that to force vaccinations—that’s never been done in the history of our country, and so I think it’s a massive expansion of federal power that goes beyond the Constitution.”

When asked whether he had received a COVID-19 vaccine booster shot, DeSantis replied that he has just had the “normal shot” and that it was “people’s individual decision” whether to get the vaccine booster dose.

Florida added 50,000 new jobs in November, a quarter of the 200,000 total jobs added throughout the country. DeSantis said it was a combination of freedoms, low taxes, and spending policies that made the state perform well compared to a state such as New York.