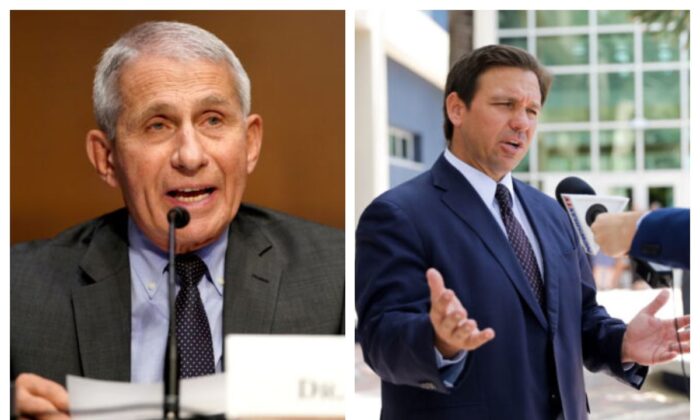 DeSantis Calls for ‘Reckoning’ of Fauci If Republicans Take Congress

Florida Gov. Ron DeSantis called on Republicans in Congress to investigate White House COVID-19 adviser Anthony Fauci if they take control of Congress and following statements from Fauci that he’s stepping down soon.

“If the Republicans take control, we need a reckoning on all of this,” he told Dan Bongino, adding that during the pandemic, Fauci “criticized me every step of the way.” The 81-year-old White House adviser had been “wrong on all the important” issues relating to COVID-19, said the governor.

For example, said DeSantis, Fauci tried to “sow fear in the population and scared a lot of parents” when he called for schools to be shut down for in-person learning. “We can never go down that road,” DeSantis said, adding that Fauci and other federal government officials in the future will again pivot to saying that lockdown measures did not go far enough.

His comments about Fauci came after Bongino played a video of Fauci asserting that COVID-19 lockdowns did not cause damage to people, although some studies have shown otherwise.

Notably, after initially supporting some COVID-19-related rules in early 2020, DeSantis later rescinded most of them and refused to impose new mandates.

DeSantis is running for reelection as governor during the 2022 midterms, although he has been flagged as a possible presidential candidate for 2024—especially if former President Donald Trump decides not to run again. Amid the speculation, DeSantis has declined to comment on running for president and often says he is focusing on getting reelected.

Last week, Fauci issued a statement via the National Institute of Allergy and Infectious Diseases (NIAID), the agency he’s headed since 1984, that he will be stepping down by December from his position as chief of NIAID, the head of the agency’s Laboratory of Immunoregulation, and top medical adviser to President Joe Biden.

But in the statement, Fauci did not say he is retiring.

“While I am moving on from my current positions, I am not retiring. After more than 50 years of government service, I plan to pursue the next phase of my career while I still have so much energy and passion for my field. I want to use what I have learned as NIAID Director to continue to advance science and public health and to inspire and mentor the next generation of scientific leaders as they help prepare the world to face future infectious disease threats,” he said, without elaborating.

Several Republicans said that if the GOP takes control of Congress, Fauci will face investigations and may be asked to again provide testimony. Typically, the party of the president tends to lose seats in the House in the midterms, and Democrats currently have a slim majority over Republicans in both chambers of Congress.