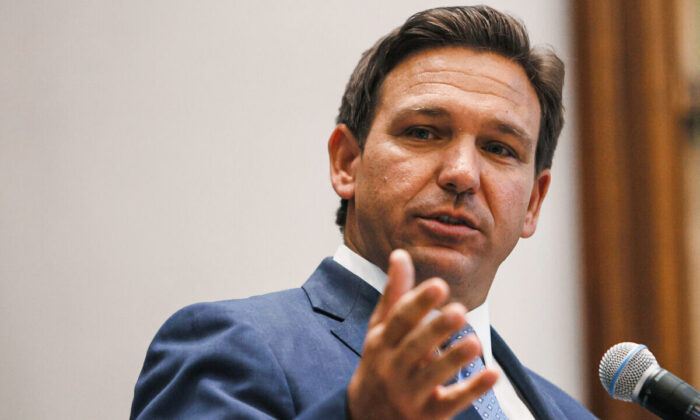 Florida Gov. Ron DeSantis speaks during a press conference at the Shul of Bal Harbour in Surfside, Fla., on June 14, 2021. (Joe Raedle/Getty Images)
US

DeSantis said that “failed border policies” are “endangering migrant children” and the nation as a whole by promoting human trafficking, which has risen 35 percent year-over-year in fiscal year 2021, according to the Department of Homeland Security.

“Border patrol agents seized 1,000 pounds of fentanyl, which is enough to kill 226 million people, or 70 percent of the U.S population,” he said. “Most of the ‘children’ who are coming into the country are males between the ages of 15 and 17.”

DeSantis said the administration is trying to compare what is happening on the southern border to Operation Pedro Pan, when unaccompanied minors were flown from Cuba to the United States in a legal manner after Fidel Castro came to power.

“To equate what is going on with the southern border, with mass trafficking of humans, illegal entry, drugs, all this other stuff with Operation Pedro Pan, quite frankly is disgusting and it’s wrong,” he told reporters. “It is not even close to the same thing–there were people coming here that were fleeing a communist dictatorship. They were not illegal–these people were sanctioned to come by the U.S. government.”

Pedro Pan was an agreement between the U.S. State Department and Catholic Charities of Miami.  From 1960 to 1962, Cuban families who wanted to flee the Castro regime sent their children to Miami, fearing for their future under the communist regime.

More than 14,000 children, ages 4 to 16,  were released into the “well organized” refugee program in order to escape political persecution.  During that time, there was no U.S. embassy located in Cuba. After the revolution, special visa waivers were issued to Cuban children and a network within Cuba was formed to educate families on how they could safely send their children to the United States, where Catholic Charities of Miami would take care of them until they could be reunited with their loved ones.  Some were reunited within six months, while others had to wait a few years.

In an effort to find answers and encourage discourse, Gov. DeSantis, along with Lt. Gov. Jeanette Nunez and Attorney General Ashley Moody, met with faith leaders and Cuban Americans who knew first-hand what an “unaccompanied minor” looked like in the 1960s when they were a part of the historic mass exodus.

Their story concerns unaccompanied children who were sent to the United States–but in a legal manner, DeSantis explained.

Maximo Alvarez, who was part of the children’s airlift, has long been an advocate of legal immigration and warned those in attendance that the Biden administration is trying to draw parallels to Pedro Pan.

“They are trying to use this program to try to convince people that this is similar to what is happening today – not even close,” he told the roundtable.

A visibly emotional Alvarez told the group that the program was much more organized and compassionate.

“Let me assure you that they [government] knew exactly who I was, they knew who my parents were,” he said.

He warned others of what is to come if things continue on the “path they are on.”

“This is the way communism works – remember, the end justifies the means. What is happening right now – children are used as merchandise, and these cartels are using these kids for personal gain,” Alvarez said.

Carmen Valdivia, executive director of the American Museum of the Cuban Diaspora echoed his sentiments.

“We came into the hands of the church; we had documents. None of us got lost; anything that had to do with us, our parents would be consulted,” she said. “Each of us were put into a group that would take care of our faith because that is what our parents wanted.”

Referring to the present situation, she said: “To put children on the frontline” and put them through a “political agenda” is “inconceivable.”

Florida’s Lt. Gov. Jeanette Nunez compared the 14,000 Cuban immigrant children of the 1960s to today’s numbers at the southern border and said she was on the side of “law and order.”

“By contrast, the chaos at our southern border means that in the last year alone, about two million migrants from all over the world have crossed our border illegally,” she said. “President Biden’s reckless open-border policies have incentivized a mass influx, in which murderous drug cartels, gang members and human traffickers are smuggling individuals across the border–children.”

Florida Attorney General Ashley Moody stood with the Lt. Governor, adding that taxpayer dollars are being used as a “travel agency to help with illegal immigration programs.”

“We had to sue our own government to get information about their policies and who they are bringing into the state of Florida,” Moody said. “We don’t know who they’re bringing here because they’re not telling us. The numbers of those folks that they have brought in and released are astronomical–Florida is feeling the effects. This is in violation of public safety immigration laws.”

Two of the roundtable guests offered solutions, but said the crisis would continue if policy did not change and protecting children must be at the forefront of the solution.

“These conversations have to begin and end with what is best for the child,” Dr. Jerry Haag, CEO of One More Child, a Florida children’s advocacy group said. “Today, regarding children, we have a failing foreign policy that is creating a domestic disaster for children as they are incentivized to become victims and make this trek all the way to the U.S. We can no longer incentivize children to make that journey where they are victimized, abused and trafficked.”

Jack Brewer, Founder and Executive Director of the Jack Brewer Foundation said that one solution would be to “help people where they are.” Jack Brewer founded his non-profit in 2006 where he helps people around the world that are in extreme poverty and assists with human rights challenges.

“We could go into those countries and actually establish programs and give people an opportunity and a chance. Florida is a catalyst for that opportunity,” he said.

Brewer said that “feeling good” about a charity is not enough. “You have to be smart. We have to first start as Americans serving each other.”

At the end of the roundtable, Brewer offered up a prayer for DeSantis and his administration, and for his efforts in combating the problems Florida and the U.S. are facing.

“Florida is the light for so many across the world,” he prayed.