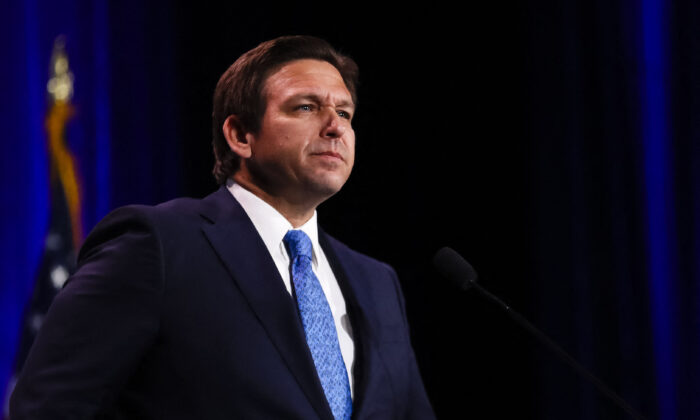 The administration of Florida Gov. Ron DeSantis on Jan. 11 requested data from state universities on the number of transgender treatments performed on students under 18.

The governor made the request in a memo to the chairs of the boards of trustees of all the state universities.

Chris Spencer, director of the Governor’s Office of Policy and Budget, told the universities in a Jan. 11 memo to “provide all information or data for all individuals, including those who were under 18 at the time of any encounter or treatment.”

Requested by Feb. 10 are data on how many treatment sessions there were, breakdowns into how many of those were first-time encounters, how many patients university clinics referred to other medical facilities, and a list of those outside facilities.

The governor’s office requests how many patients were diagnosed under a billing code related to transsexualism and a breakdown by whether or not patients had been previously diagnosed.

“It’s an excellent move and should be applauded by every sane adult and professional,” Australian psychologist Dianna Kenny told The Epoch Times on January 19. She has published two books on gender dysphoria in young people and its treatment.

Kenny said that DeSantis is “absolutely” right to be concerned about the issue. “It’s reckless. It’s not surveilled. It’s not policed. There’s no external oversight of clinics going on around the world, not just in the USA.”

Kenny said that what goes on inside gender procedure facilities can be very secret, with parents marginalized from decision-making.

Spencer required the universities to report the amount of behavioral treatment students received.

The memo makes clear the governor isn’t seeking information on individuals: “Please ensure all responses do not contain personally identifiable information or protected health information and are provided in an aggregated and de-identified format.”

In one study, Kenny said, “many of the children have one or two half-hour sessions with a psychologist before they’re signed off for medical treatment. It’s the worst medical scandal of all time. Worse than the lobotomy scandal of the 1930s and 1940s.”

Kenny was a University of Sydney professor before entering private practice. She is the author of “Gender Dysphoria in Children and Young People” and co-authored Gender Exploratory Therapy Association’s recently published “A Clinical Guide to Therapists Working With Gender-Questioning Youth.”

While schools and universities around the country enthusiastically support transgenderism, there’s growing concern about transsexual surgery and medical treatments, with increasing reports of recipients regretting it or suffering side effects.

Treatment of gender dysphoria, the diagnosis under which insurance companies pay for transsexual treatment, has become a big business. It is estimated to rise from $2.1 billion in 2022 to $5 billion in 2030.

Dr. Clifford Hopewell, a Texas neuropsychologist and former president of the Texas Psychological Association, told The Epoch Times that too many therapists write out prescriptions with no questions asked. “It’s all bogus. There’s this transgender money-making machine.”

Transgender surgeries can cost $40,000. Lifetime care can cost $200,000. Scott Newgent, 49, a woman who began transitioning to become a man seven years ago, told The Epoch Times the transition had cost $1.2 million so far, the cost inflated by serious complications Newgent suffered.

Meanwhile, with public schools and universities normalizing and promoting gender confusion, the number of those identifying or diagnosed as transgender has mushroomed. Government studies estimate that 115,000 to 450,000 Americans identified as transgender in 2009. In 2022, the number grew to 1.4 million Americans.

Research by journalist Abigail Shrier suggests that the rate of transgenderism has risen by about 1,000 percent, going from a phenomenon that specialists rarely saw to one so common that over half of Americans now personally know someone who identifies as transgender or gender-neutral. A CDC report showed the number of young adults identifying as transgender nearly doubled from 2017 to 2020.

Kenny told The Epoch Times earlier that the Diagnostic and Statistical Manual of Mental Disorders estimated that transgenderism occurs in 1 in 10,000 boys and 1 in 27,000 girls.

Kenny said much of the science supporting transgender treatment is profoundly flawed and called some fraudulent. She called the explosion in the diagnosis of gender dysphoria a “social contagion” fueled by the rapidity of the Internet and the role of influencers on social media. Kenny thinks social contagion contributed to spikes in suicide and eating disorders among adolescents. The spikes recede, she said, “but not until they’ve ruined the lives of thousands of people.”

“You cannot explain a four to five thousand percent increase of young people declaring themselves anything other than by social contagion,” she said.

Jackson Elliott and Darlene McCormick Sanchez contributed to this report.