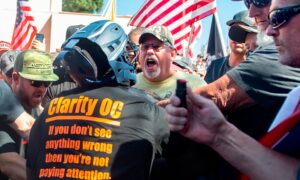 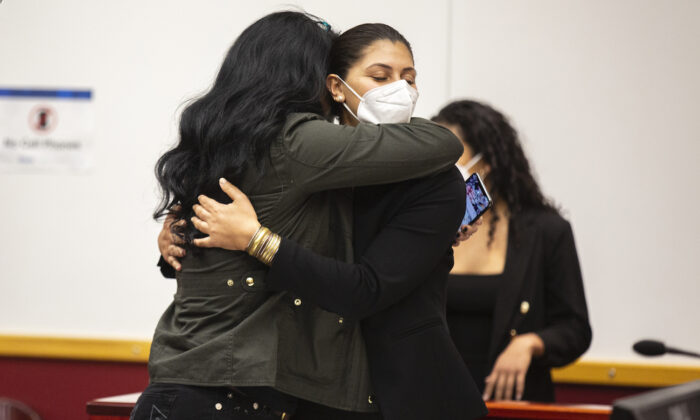 Des Moines Register Reporter Andrea Sahouri hugs her mom after being found not guilty at the conclusion of her trial, at the Drake University Legal Clinic, in Des Moines, Iowa, on March 10, 2021. (AP Photo/The Des Moines Register, Kelsey Kremer)
US News

A jury in Iowa has acquitted a reporter of all charges she incurred while covering a Black Lives Matter protest last year.

The jury on Tuesday found Des Moines Register reporter Andrea Sahouri, 25, and her then-boyfriend Spenser Robnett, 24, not guilty of two misdemeanour charges—failure to disperse and interference with official acts. Robnett had stood trial earlier this week. The decision came after less than two hours of discussion.

Sahouri told reporters she was relieved by the acquittal. She called it a victory for press freedom and democracy.

“I have been dealing with a lot of pressure and anxiety and trauma from the assault and continuing to do my job has been difficult,” she said. “But it is important. That is why I am in this field.”

Sahouri’s arrest happened in May 2020. Video captured by a responding officer showed Sahouri, in pain from being pepper-sprayed, repeatedly telling officers that she was a reporter on assignment.

Robnett said he was sprayed and handcuffed after telling a police officer that Sahouri was a journalist.

The three-day trial saw prosecutor Bradley Kinkade, an assistant Polk County attorney, telling jurors that it didn’t matter that Sahouri was working. He said that her profession wasn’t a defense against the misdemeanor charges.

Kinade argued that both Sahouri and Robnett were within hearing distance when police ordered crowds to disperse but the two remained with the crowd. He also argued that videos and photos she had posted on Twitter while at the scene was evidence that she was near an unlawful assembly.

Arresting officer Luke Wilson had testified that Robnett tried to pull Sahouri away from Wilson’s custody and Sahouri had briefly resisted arrest. Wilson, however, said that he didn’t record the arrest on his body cam and didn’t try to recover the video later, in apparent violation of the Des Moines Police Department policy.

“Once I determined she wasn’t leaving, I had to take action,” Wilson testified, adding that he still didn’t know who she was, according to The Associated Press.

Defense attorney Nicholas Klinefeldt asserted that Sahouri and Robnett didn’t hear any dispersal orders, and that she was only trying to report from places where she was allowed. He also refuted Wilson’s claim that the two had interfered. Sahouri and Robnett would have been fined hundreds of dollars and possible jail time of up to 30 days if convicted.

The defense was funded by Gannett, the parent company of the Des Moines Register. Employees of the newspaper chain expressed support for Sahouri on social media.

Columbia Journalism School, where Sahouri earned a master’s degree in 2019 before joining the Register, also expressed solidarity by promoting the hashtag #JournalismIsNotACrime.

“Grateful justice was done and @andreamsahouri was fully exonerated,” Gannett news president and USA Today Publisher Maribel Wadsworth announced on Twitter. “But it should never have come to this. She was assaulted, arrested, charged and tried for doing her job. Today’s victory is as much a victory for the 1st Amendment as it is for Andrea.”

More than 100 U.S. journalists were arrested or detained last year for covering various Black Lives Matter protests, although most were not charged or had their charges dismissed, according to Press Freedom Tracker.