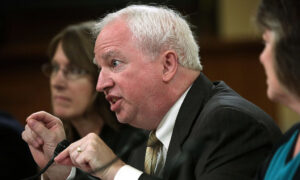 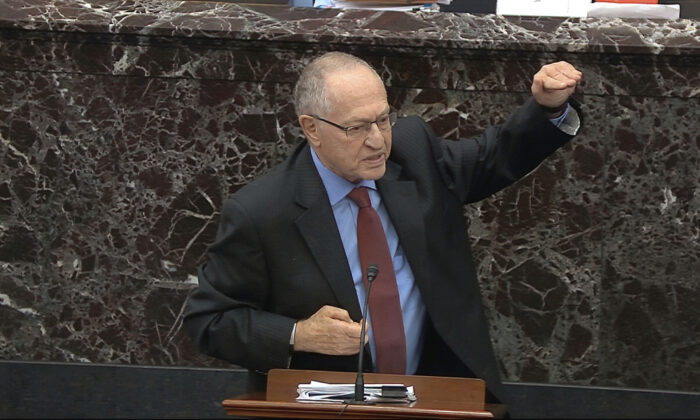 Alan Dershowitz, an attorney for President Donald Trump, answers a question during the impeachment trial against Trump in the Senate at the U.S. Capitol in Washington, Jan. 29, 2020. (Senate Television via AP)
Social Issues

Harvard Law professor emeritus Alan Dershowitz said Twitter, YouTube, and other legacy tech companies are “partisan political tools” and should not be protected under Section 230.

“You have to ask yourself, why do [YouTube and Twitter] allow other things to go on, blatant lies, falsehoods defamations, bigotry of every kind, on [their platforms]?” asked Dershowitz. “Doesn’t that send a mixed message?”

Dershowitz noted that these firms are waging a dangerous war on free speech.

Dershowitz added: “Now, does that pose a danger to our Constitution? No. They’re not bound by the First Amendment. They are private more, or less. They are really so powerful that the question arises, what is the line between private and public when it comes to massive social media and communications?”

But he stipulated that the companies “certainly do pose a danger to the culture of the First Amendment, to the marketplace of ideas, to the freedom of Americans to pick and choose.”

It came after Google and Apple blocked Parler from their respective app stores—and as Amazon Web Services suspended the social media company from using its services on Monday morning. Parler retaliated by filing a lawsuit against Amazon in Washington state, arguing that the company is engaging in monopolistic practices and voided a contract with the company.

Days before that, Twitter moved to suspend President Donald Trump and claimed he is promoting claims that would incite violence. Trump, in response to reporters on Tuesday before he departed for Texas, remarked that his comments to protesters before violence and a breach at the U.S. Capitol were appropriate.

“People thought that what I said was totally appropriate,” Trump told reporters in response to the Big Tech backlash for his speech on Jan. 6 to protesters. “We want no violence … absolutely no violence,” he said.

“People thought that what I said was totally appropriate and if you look at what other people have said, politicians at a high level, about the riots in the summer, the horrible riots in Portland and Seattle and various other places, that was the real problem,” Trump remarked. He pointed to speeches and rhetoric by various political leaders across the country over the past summer in the midst of historic riots.