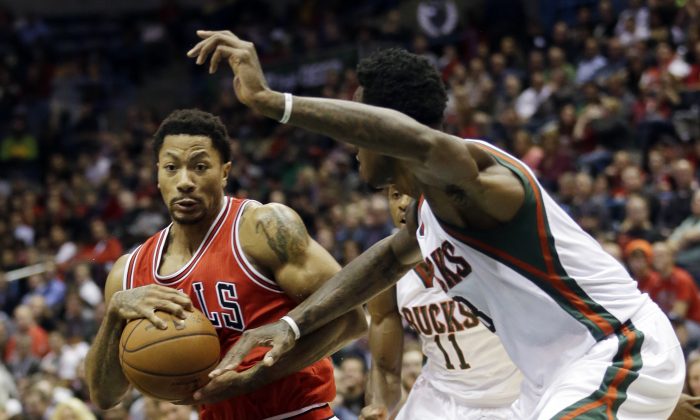 An article saying Derrick Rose retired at age 26 due to “to a recent eczema diagnosis” is satire. Chicago Bulls' Derrick Rose tries to drive past Milwaukee Bucks' Larry Sanders during the first half of an NBA basketball game Wednesday, Nov. 5, 2014, in Milwaukee. (AP Photo/Morry Gash)
Life & Tradition

An article saying Derrick Rose will retire at age 26 due to “to a recent eczema diagnosis” is satire.

“Doctors say the skin disorder is caused by his sweat. This was the final straw to the plagued all-star point guard’s career when the intense itching became too much to hide,” the article says. It also includes fake quotes from Rose, a point guard with the Chicago Bulls.

It was published on the Daily Currant, a satirical publication.

According to its disclaimer, it should not be taken seriously. “The Daily Currant is an English language online satirical newspaper that covers global politics, business, technology, entertainment, science, health and media. It is accessible from over 190 countries worldwide – now including South Sudan.”

It adds: “Our mission is to ridicule the timid ignorance which obstructs our progress, and promote intelligence – which presses forward … Our stories are purely fictional. However they are meant to address real-world issues through satire and often refer and link to real events happening in the world.”

On Monday, the Rose article had tens of thousands of shares and “likes” on Facebook.

A number of people apparently thought it was real.

“Did Derrick rose retire?” one person questioned on Twitter.

Added another: “Saw some derrick rose thing saying he retired after being diagnosed with eczema…”