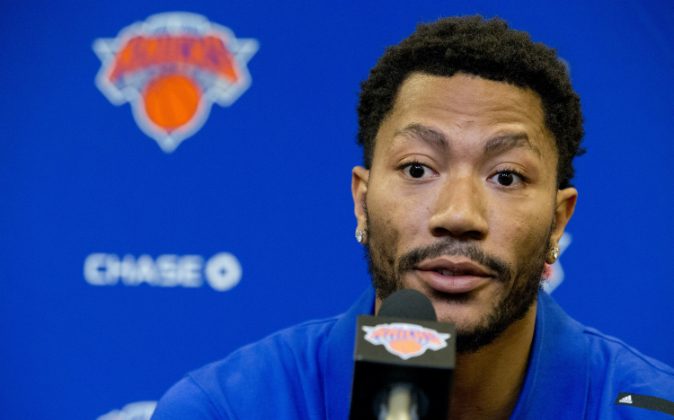 FILE - In this June 24, 2016, file photo, Derrick Rose speaks during a news conference at Madison Square Garden in New York. NBA star Rose is set to return to the witness stand in a $21 million lawsuit that alleges he and two friends raped an incapacitated woman. Before Rose retakes the stand Tuesday, Oct. 11, a judge will consider a mistrial request from Rose's lawyer. Rose and his friend were cleared of rape in civil lawsuit on Oct. 19. (AP Photo/Mary Altaffer, File)
US

A federal jury cleared New York Knicks guard Derrick Rose and his co-defendants—Randall Hampton and Ryan Allen—in a multimillion-dollar civil lawsuit brought by the athlete’s ex-girlfriend who accused the trio of gang-raping her in 2013.

The men were accused of breaking into the woman’s Los Angeles apartment in the early hours of Aug. 27 in 2013, and engaging in sexual intercourse with her when she was heavily incapacitated. The woman had claimed that she was drugged at a party held at Rose’s Beverly Hills rented home.

After three hours of deliberations on Oct. 19, the eight-person jury—comprised of six women and two men—found that the woman was a willing participant, concluding that the activities that night were consensual.

The unnamed victim was seeking $21.5 million. In his closing arguments Tuesday, attorney Michael Monico said that the woman was seeking revenge against Rose because he had ended their relationship.

“This woman has tried to trick people through much of her life, men especially,” Monico said, reported the Chicago Tribune. “Who is she trying to trick in this courtroom, ladies and gentlemen? You. She doesn’t have any evidence, but she can cry.”

Rose has always denied the allegations and is glad to vindicated by the verdict.

“I am thankful that the jury understood and agreed with me,” he said in a statement to the Associated Press. “This experience and my sensitivity to it was deep. I am ready to put this behind me and focus on my family and career.”

The two-week trial in a downtown Los Angeles courtroom was mired with salacious details about Rose’s personal life and testimony of differing accounts of the night in question.

Text messages have proved to be pivotal evidence in the trial. Rose testified that he had suspected the woman would claim the three men raped her after he had received a suspicious text a few days after the incident.

Rose’s trial has clashed with the New York Knicks’ basketball schedule, having missed five preseason games and seven practices. Rose, who was acquired in a trade from the Chicago Bulls this past June is expected to play in the team’s season opener against the Cleveland Cavaliers on Oct. 25.

Rose and his three friends are still the subject of a criminal investigation by the Los Angeles Police Department.