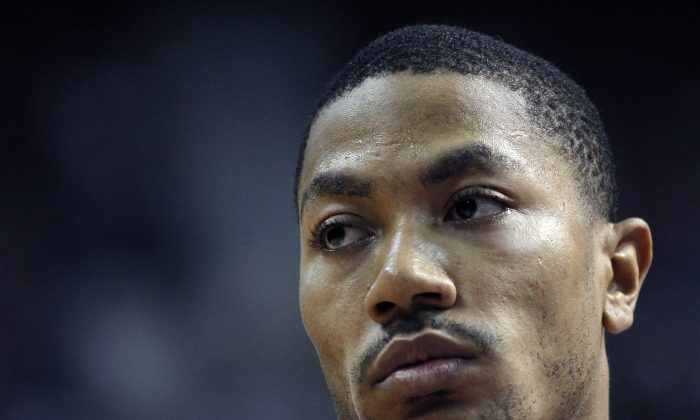 This April 15, 2012 file photo shows Chicago Bulls guard Derrick Rose during an NBA basketball game against the Detroit Pistons, in Auburn Hills, Mich. Rose is out for the season. The team said Monday, Nov. 25, 2013, that Rose had successful surgery to repair a torn medial meniscus in his right knee. Rose was hurt Friday night, Nov. 22, 2013, at Portland. (AP Photo/Paul Sancya, File)
NBA

Derrick Rose Could be on Bench in a Few Weeks

Derrick Rose, the Chicago Bulls guard, will sit on the bench in the near future as he continues his rehab from knee surgery.

Thibodeau said he’ll be ready to sit on the bench with his teammates by mid-January.

“Yeah, probably in the next few weeks,” Thibodeau said. “He’s still … he’s on a crutch and he’s got his brace, so I don’t want him sitting there when he’s like that.”

When Rose went down with a knee injury in November, the team said that he will miss the remainder of the season. However, there has been speculation that Rose might return for the playoffs.

“He can lift with his upper body and do all his rehab stuff,” Thibodeau told the Chicago Sun-Times. “He’s starting to move around a little bit more now. He can go in the pool.

Without Rose, the Bulls have had difficulty winning games but are currently sixth-place in the Eastern Conference.

Luol Deng said the Bulls are trying to guard against injuries.

“Yeah, I think we learned from the past,’’ Deng told the Sun-Times.

“I think the players, too. We talk to each other. In the past, I would’ve been out there playing, then missed another month or so. And I really don’t want to do that. And the other thing is, I don’t want to keep coming in and out. I think that’s the last thing we need. We’re trying to get going.