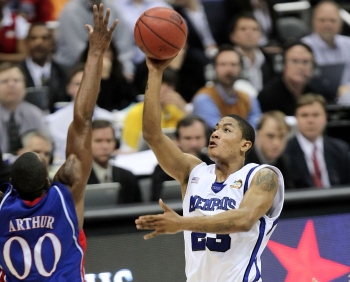 Former Memphis Tiger Derrick Rose got his wish by being chosen first overall in the 2008 draft pick by his hometown team the Chicago Bulls. (Jed Jacobsohn/Getty Images)
NBA

Although the NBA season ended when the Boston Celtics won the NBA championship in mid-June, the association didn't hit official off-season mode until the conclusion of the NBA draft last Thursday.

While news prior to the draft included Shaquille O'Neal losing his sheriff's badge for another display of his ghastly rap skills and Boston players enjoying their 17th NBA championship, other teams were aspiring to one day win a title of their own, starting with the addition of some new players from the amateur ranks.

Going into the 2008 draft, consensus amongst analysts and mock drafters had Memphis point guard Derrick Rose and Kansas State forward Michael Beasley as the top two prospects. The Chicago Bulls, who had a 1.7 percent chance of getting the top pick overall in the draft lottery and still won, had the honor of choosing between the two.

Rose, a native of the windy city, lobbied hard to be taken by his home team, saying it would be heartbreaking if the Bulls took Beasley.

"I'll hate it," Rose told reporters prior to the draft when asked how he would feel if he wasn't the top pick.

"Anybody would hate their hometown not taking you, knowing that it could happen."

Rose didn't have an ounce of hate in his heart come draft day though, as the Chicago Bulls decided to take the hometown boy with the top pick.

"It means a lot to play at home. The Bulls had great players like Michael Jordan, Scottie Pippen, Dennis Rodman," said a jubilant Rose to the Chicago Tribune after being selected.

"Just knowing that I can be a part of that history, it's amazing."

Another storyline going into the draft was the Miami Heat.

In fact, The Miami Herald reported that the Heat were more interested in taking USC's O.J. Mayo as opposed to Beasley, but when it came for the Heat to take the draft podium, it proved to be all a ruse as team president Pat Riley followed the script and took the Kansas State player.

"I don't think there was any question on our part," Riley told the Associated Press afterwards.

"We love Michael. He's an incredible athlete. He's a great scorer. I don't even want to get into talking with you about the numbers we've analyzed. They're really off the charts."

Other deals of note saw Indiana Pacer Jermaine O'Neal head north of the border to the Toronto Raptors in exchange for T.J. Ford, Rasho Nesterovic, and the Raptors' 2008 first rounder, seven-footer Roy Hibbert.

New Jersey's Richard Jefferson found himself switching to a Milwaukee zip code as the Nets dealt the forward to the Bucks for forwards Yi Jianlian and Bobby Simmons.