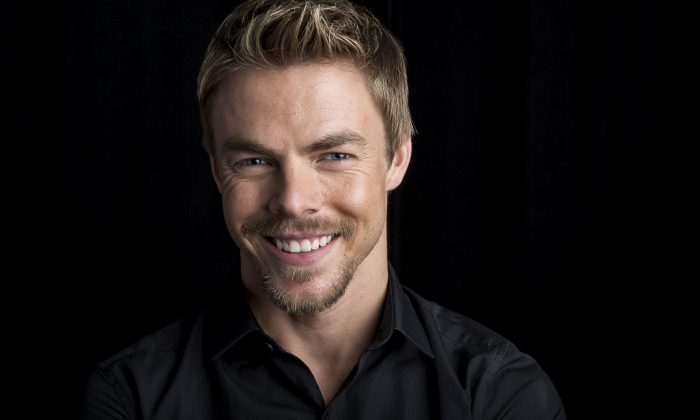 Dancer, singer, actor, Emmy-winning choreographer and now author Derek Hough poses for a portrait in promotion of his new book "Taking the Lead: Lessons From a Life in Motion," on Thursday, August 7, 2014 in New York. (Photo by Amy Sussman/Invision/AP)
Entertainment

Derek Hough is one of the most talented dancers on Dancing With the Stars, and consistently brings his non-pro partners to the final rounds of the show.

Derek, 28, first appeared on the show in season 4 in 2007 as a guest instructor with sister Julianne Hough and her partner Apolo Anton Ohno. The next season he joined as a professional dancer and was teamed with Jennie Garth–they made it to the semifinals before being eliminated, getting in fourth place overall.

Derek has been in every season since then except for season 12, during which he was filming Make Your Move 3D. He’s been extremely successful, winning the Mirror Ball five times, and routinely getting near the top if he and his partner don’t win it all.

Some fans note that Derek often gets younger and athletic partners but his feats are still impressive nonetheless.

“Hough is best known for his innovation and daring choreography on the show. His work has brought him Emmy nominations and inquiries from the film and music world regarding his dance knowledge and ability,” according to ABC.

Hough is not believed to currently have a girlfriend, although he has dated a lot over the years. He had a relationship with India de Beaufort from 2000 until 2008, the year he began dating Shannon Elizabeth after they met (and were partners) on DWTS.

Hough and Elizabeth later split, and his other relationships have included Cheryl Cole and Nina Dobrev.

Besides dancing, Derek has dabbled in music, writing, and acting. He had a band with close friend Mark Ballas for a while, and published his first book in August 2014.

Mark Ballas and Derek Hough: Photos of Best Friends Through the Years

Derek has appeared in multiple movies, including Rock of Ages, and a number of television shows, including a recent stint on Nashville.

He has also acted in multiple plays, including Burn the Floor on Broadway.

According to the blog Pure Derek Hough, Derek was born on May 17, 1985 in Salt Lake City. His parents and all four of his grandparents were all dancers, and Derek has said that his mother saw him and his four siblings as “the blonde Osmonds.”

Derek participated in sports, art classic, music lessons, and dancing when he was young. He was convinced to undergo the latter when he figured out that that is where all the girls were.

Derek met two high-level coaches–Mark’s parents–at a school in Utah and Derek moved with them to England. Julianne soon moved to join them.

Derek attended a performing arts school, Italia Conti Academy of Performing Arts. He competed and tried out for a range of roles and finally landed the leading role of Ren in Footloose in London’s West End, the equivalent of Broadway.

He later decided to join DWTS in season 5 despite hesitating because he and Mark had bigger ambitions for music than dancing.

Derek is now worth an estimated $3 million.

Valentin Chmerkovskiy and Janel Parrish: Best Pictures of Dancing With the Stars Duo