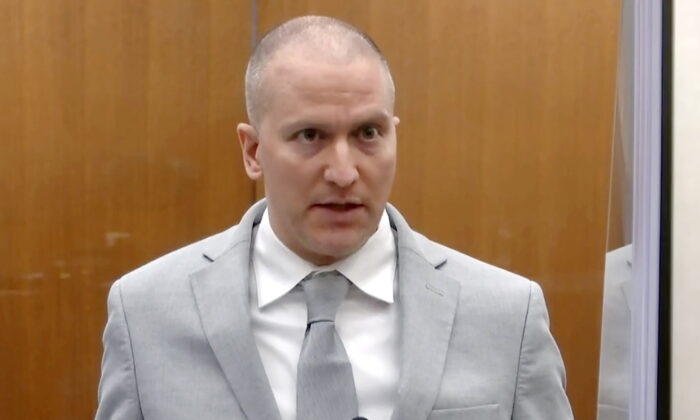 Former Minneapolis police officer Derek Chauvin was on Thursday sentenced by a federal court judge to serve 21 years in prison for violating the civil rights of convicted felon George Floyd.

Chauvin pleaded guilty to the federal civil rights charges in December 2021. Prosecutor LeeAnn Bell sought a full 25-year sentence, to be served concurrently with his 22-and-a-half-year sentence for his state convictions of murder and manslaughter.

Bell told the judge that Chauvin “wasn’t a rookie” and had admitted that “his conduct was wrong and he did it anyway.”

In handing down his sentence, U.S. District Judge Paul Magnuson opted for the low end of the plea agreement.

“I really don’t know why you did what you did. To put your knee on a person’s neck until they expired is simply wrong,” Magnuson said.

“Your conduct is wrong and it is offensive,” the federal court judge added.

Chauvin was accused of depriving Floyd of his rights by conducting “unreasonable seizure, which includes the right to be free from the use of unreasonable force by a police officer.”

The former Minneapolis police officer will likely spend around 18 years in prison, with parole and presuming good behavior.

His state sentence of 22 and a half years will run at the same time as his most recent federal sentence of 21 years. He will be incarcerated in a federal prison.

Floyd died on May 25, 2020, while being arrested for allegedly attempting to purchase cigarettes with a counterfeit $20 note in Minneapolis.

Floyd’s death triggered left-wing demonstrations, riots, and violence across the country. Amid the protests were calls to “defund the police,” which some critics said led to a significant rise in crime across major U.S. metropolitan areas.

Minneapolis was particularly hit hard by weeks of riots, arson attacks, looting, and violence in the wake of Floyd’s death, causing tens of millions of dollars in damage.