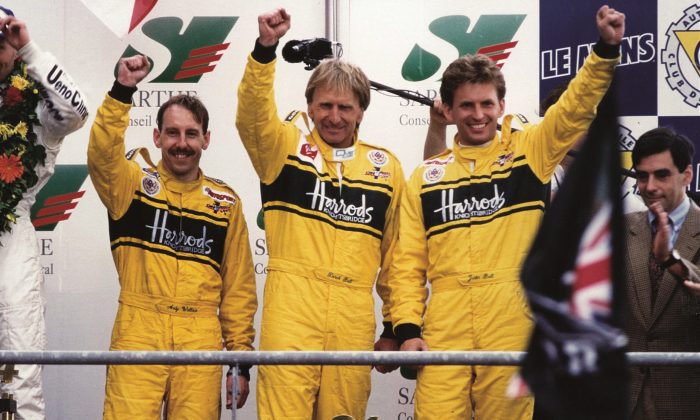 From left to right Andy Wallace, Derek Bell, and Justin Bell in 1995 at the Le Mans Podium. (The Derek Bell Collection)
Motorsports

London 1990—I was planning New Year press stories to launch a range of hair products by Paul Mitchell that would be combined with a TV and radio campaign. At the time I was involved with ‘Horne Brothers’, a top gentlemen’s out-fitters of the time, and one of the largest fashion brands in the United Kingdom. Working on this account was Caroline Neville, of the then Caroline Neville Associates, one of the foremost beauty and fashion PR companies. She was in the throes of planning a campaign for their new clothes range, with a story on men who wore stylish causal clothes to work as opposed to suits. To capture the attention of the press, she used top names from the worlds of fashion, hairdressing, art, engineering and motor racing that fell into this clothes wearing category. Caroline was in touch with Derek Bell, a very successful British racing driver, and that is how I met Derek, and his wife Misti, at a photo shoot to model the new Horne’s designed clothes line.

In my planning for the hair product launch, my friend and producer Russ Malkin, who was in marketing and photography at the time, said he would plan and film a documentary about a car ‘race’ against the Orient Express that would achieve national TV coverage. This would lead me to work with both Derek and his eldest son Justin Bell. Russ would start the racing challenge from central London’s Victoria Station, with teams of celebrities racing Porsche, Aston Martin, Lamborghini, Ferrari, Mercedes and Jaguar super cars. The Team Paul Mitchell drivers included actor James Coburn, John Paul DeJoria, co-founder and CEO of Paul Mitchell, and Justin. Derek drove the first leg from London to Dover and then sensibly bordered the Orient Express with James Coburn and Yasmin Le Bon for company.

Fast forward 20 or so years and Derek now lives in Boca Raton, Florida with his wife Misti and their 14-year-old son Sebastian. The fact that Derek is even here to talk to me about his career in motor sport after all these years is remarkable. He lived and raced through what is widely regarded as the most dangerous time in motorsport during the late 1960’s and through to the 1970’s. He recalls, still with great sadness, being driven from his hotel to the Hockenheimring circuit for one of his first Formula 2 races with Graham Hill and Jim Clark for company. That same race that saw the prestigious talent of Jim Clark lost forever in the trees that cast a shadow over this once great circuit.

Yet his passion for the sport remains undiminished despite the passing of the years, a passion which lead him to be a trackside marshal at a race meet on the Easter weekend at Goodwood in 1962, the closest he could get to a circuit, short of racing. He witnessed his hero crash, bringing to a premature end, the racing career of Stirling Moss.

Passion, drive and a natural driving ability saw Derek take his first win at the famous Goodwood race track at his very first race in 1964 in the wet, driving a Lotus 7 he had cobbled together at his family’s farm.

That innate natural ability was recognized by his step father Bernard Hender, nicknamed the ‘The Colonel’, and provided Derek with the platform on which to base the early part of his racing career, helped by a not inconsiderable bank loan for the time. Banks back then obviously recognized talent as well or else the ‘Colonel’ was very persuasive. Church Farm Racing was born and would see Derek progress quickly through the ranks of Formula 3 and Formula 2 single seat racing. A raft of attention grabbing results earned him an audience with Enzo Ferrari, ‘Il Commendatore’ and a contract with the Maranello team. It is a meeting which Derek remembers vividly, conjuring up the image of Enzo replete with trademark dark glasses, his overcoat resting on his shoulders and flanked by his loyal lieutenants as he walked down the factory line of gleaming Ferraris to greet him as a Ferrari works racing driver.

The glamour and kudos of racing for Ferrari could not though make up for the lack of a competitive car, Derek by his own admission recognizing that he had arrived at Ferrari as they entered one of their fallow periods. He moved on from Ferrari, racing for a number of teams and never quite getting into the seat of a competitive car. The same can be said of today’s modern Formula 1, talent and ability abound, unless though you happen to be in the right car during a period of ascendancy the results will not come, a position Derek found himself in.

The Ferrari connection did spawn his resurrection and his eventual rise to dominance in sports car racing with his first sports car race in a Ferrari 512M at Spa in 1970 for Belgian car dealer Jacques Swaters followed by his first taste of Le Mans that year in a works Ferrari 512M. That in turn prompted John Wyer, of Gulf racing fame to come calling, with Derek experiencing his first sports car race victory in a Porsche 917 at the 1971 Buenos Aires 1000km. Podiums in the Gulf Porsche 917, with co-driver Jo Siffert, came swift and fast that year. Although he retired from the 1971 Le Mans, Derek recorded a top speed of 246mph on the French circuit at La Sarthe, an astonishing speed by today’s standards let alone in 1971.

His niche was found, his ability to focus and concentrate for long periods of time combined with that innate natural ability made him the perfect endurance racing driver in sports cars. Listening to his description of finding a serene calm at over 240mph plus down the Mulsanne straight at Le Mans, trees either side of the circuit blurring into one green mass with the black of the tarmac and the blue of the sky being the only points of definition, makes you release how focused he was behind the wheel. To do that lap after lap requires extreme concentration, one mistake and the consequences could be and were fatal.

Derek counts himself as fortunate in that respect; he never suffered a life threatening injury across his entire racing career. He rode his luck certainly, suffering facial burns when the car he was driving caught fire filming a sequence for the cult film Le Mans with Steve McQueen in 1971, directed by John Sturges of ‘The Magnificent Seven’ and ‘The Great Escape’ fame.

As Derek matured as a driver, he also appreciated the importance of having a strong team around him; working together meant success, which also meant racing with a co-driver you could rely on just as much as he could rely on you. His most successful racing partnership would be with Belgium Jacky Ickx; together they won Le Mans three times.

Luck, or is it a case of you create your own luck because of hard work, saw Derek winning back at Le Mans with a resurgent Porsche team in the Group C 956 and 962’s in the early 1980’s, as well as taking back to back World Championships and winning at Daytona three times. Those formative years in single seaters, understanding and mentally conquering the ever present dangers on the race track combined with that natural talent saw Derek become one of the most successful sports car racers of all time.

Yet his stand out moment in a long racing career is not his five wins at Le Mans, those came as a consequence of planning, team work and efficiency behind the wheel resulting in a job well done and mentally noted as such, no that moment came in 1995. Having led that year’s Le Mans for 16 hours, a mechanical problem dropped his Harrod’s sponsored McLaren F1 car to third place at the race end. It was that moment, standing on the podium with his son Justin, sharing together the passion of the crowd below, that stood out for Derek, on Father’s Day.

The experience gained over the years has been recognized with an MBE presented to him by the Queen and inductions into Halls of Fame. His peer group also recognized that experience and in 2000 Derek undertook an offer he could not refuse: to work on a project to take Bentley Motor Cars back to Le Mans and win. And win they did in 2003. Now in his 13th year with one of the most prestigious and important collaborations of his professional career, Derek as Bentley’s now global brand ambassador has just returned from Shanghai and the launch of their new Speed GT model. And what better, than to be involved with one of the world’s top car producers. So says Derek Bell.

He has had a most successful, and, for me as a fan, most fascinating of motor racing careers. From Porsche to Bentley, Derek Bell—Le Mans legend and champion, has been my personal hero for as long as I can remember, whether I was watching him race on TV or listening to his races on radio in the UK.

Derek has kept his cool and his body in good order and his cars on the race track. And he is still here to tell the tale.

To read the full story on Derek Bell read his book: ‘Derek Bell My Racing Life’ published by Haynes.

Harold Leighton has created and published books such as, “From Salon to Celebrity” and his first photographic book “The History of British Hairdressing 1950 to 2004″ but would like to personally thank Patrick Crew for help on this piece.