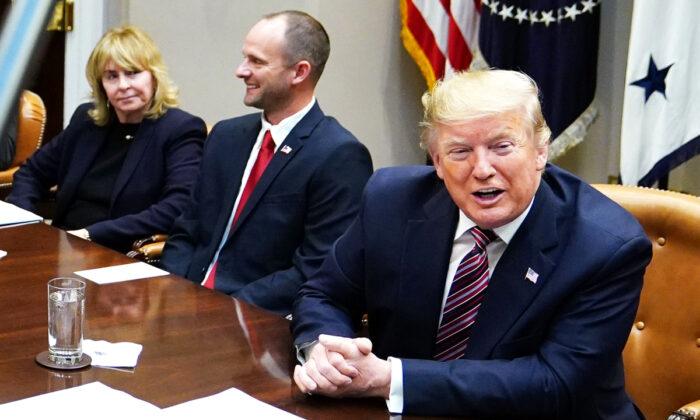 President Donald Trump takes part in a round table discussion on business and red tape reduction in the Roosevelt Room of the White House on Dec. 6, 2019. (Mandel Ngan/AFP via Getty Images)
By Alan McDonnell

President Donald Trump and Vice President Mike Pence hosted a round-table discussion with small-business leaders on Friday to discuss the administration’s Fall Unified Agenda—a report on the regulatory and deregulatory actions taken in the past year, with an update on cost savings achieved.

According to the White House statement, the president is making good on his promise to end excessive federal regulations and bring economic freedom and prosperity to all Americans. With 390 deregulatory actions across two dozen agencies, the report stated that regulatory costs had been slashed by up to $50 billion.

“So many of the things we do, it’s based on common sense,” said the president.

According to a White House press release: “The Trump Administration’s deregulatory actions across a vast array of American industries are the most significant in U.S. history. The Council of Economic Advisers (CEA) estimates (pdf) that after 5 to 10 years, this new approach to federal regulation will have raised real incomes by $3,100 per household per year by increasing choice, productivity, and competition.”

According to a June 2019 interim report on The Economic Effects of Deregulation (pdf): “The CEA uses a pragmatic, streamlined approach to analyze the costs that regulatory actions impose on consumers, small businesses, and other economic actors. This approach requires estimates of a small set of key parameters that describe the market that is primarily affected by the regulatory action in question. We follow a standard approach in cost-benefit analysis and rely on revealed preferences in markets.”

According to a statement, President Trump’s Executive Order 13771 is the cornerstone of the administration’s deregulatory success, and requires federal departments and agencies to: (1) eliminate two regulatory actions for each new regulatory action; and (2) not exceed a regulatory cost allowance.

“We have a lot of things that we’re working on,” said President Trump. “To build a road can take 22 years to get approvals. And we’ve got it way down now.  … We have roads where they’ve been going for … decades. … And by the time they get approved, they cost 50 times more…”

“And we’ve got that process down to four-and-a-half years. We’re going to try and get it down to almost one year. That doesn’t mean a road or a highway doesn’t get approved. But if they don’t get approved, it goes quickly, so they get rejected quickly,” Trump said.

The president said that now “the industry is doing incredibly well. They’re building a lot of extensions. They’re building brand-new plants where they never built a new plant. … We weren’t going to have a steel industry. And that’s so unacceptable, even from a defense standpoint. I mean, can you imagine if we have to go to another country to get steel?”

According to the White House: “Under President Obama, the number of restrictive terms increased by about 120,000. For President George W. Bush, the increase was about 105,000. Under President Trump, regulatory restrictions have decreased, providing further evidence of the administration’s commitment to stopping regulatory accumulation.”

By increasing choice, productivity, and competition, the White House says, the Trump administration’s deregulatory success has cut red tape for American businesses and extended them the freedom to create jobs. Given the administration’s ambitious Fall Unified Agenda, which is projected to lead to nearly $52 billion in additional savings in the fiscal year 2020 alone, deregulatory benefits to consumers, job creators, and the economy are bound to grow more than ever in 2020.