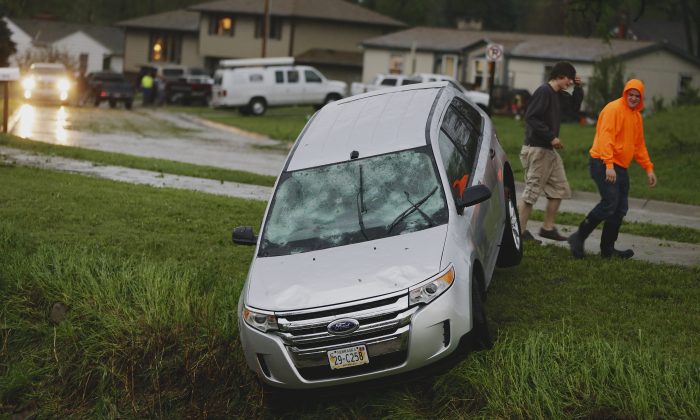 A car with it's windows smashed from hail hangs over a creek following a severe thunderstorm in Blair, Neb., Tuesday, June 3, 2014. Severe weather packing large hail and heavy rain rolled into Nebraska and Iowa on Tuesday as potentially dangerous storms targeted a swath of the Midwest, including states where voters were casting ballots in primary elections. (AP Photo/Nati Harnik)
US

A derecho that is believed to have started in Colorado went 1,000 miles across the Midwest and went into the southeast United States.

According to The Weather Channel, the storm system sent powerful wind gusts, thunderstorms, and hail for 15 hours straight on Thursday.

The storms also brought with it flooding and it blew off the roofs of buildings, while it collapsed walls. A Cessna airplane was also tossed into the air.

Three people are said to have died from the storms.

In Arkansas, two people were killed, reported NWAOnline.com, which said it left thousands without power. Winds got up to 80 mph.

“This is the worst I’ve ever seen,” Lawrence County Sheriff Jody Dotson said, referring to the storm. “I’ve never driven in anything as bad as this in my life. We’ve got people clearing trees off the roads everywhere. We’re making lists of … all the places we’ve got lines down.”

The word “derecho” is Spanish for “straight” and is pronounced “dāˈrāˌCHō.”

DES MOINES, Iowa (AP) — Homes and cars in parts of Nebraska and Iowa were pummeled Tuesday by baseball-sized hail and damaging winds as potentially dangerous storms targeted a swath of the Midwest, including the Omaha area, where flooding left dozens of drivers stranded and prompted home evacuations.

The National Weather Service said reports of extensive hail damage and flooding had trickled in as storms pushed into Nebraska and moved into neighboring Iowa, where winds of up to 85 mph were recorded. Up to 4 inches of rain was expected in parts of Nebraska and Iowa.

“This is one of these days we can’t let our guard down,” said Bill Bunting, forecast operations chief at the Storm Prediction Center in Norman, Oklahoma. “It’s unfortunately panning out as we thought it would. This is shaping up as a very dangerous evening.”

Officials said the highest risk for severe weather was centered in parts of eastern Nebraska, western and southern Iowa, and northeast Missouri. Officials said there was the potential for a weather event called aderecho, which is a storm of strong straight-line winds spanning at least 240 miles.

Terry Landsvork, an observation program leader for the National Weather Service in Valley, Nebraska, said heavy rain and flooding was reported in the Omaha area.

“The storms, we call it training. It’s like a train going down the track. One car goes by, another one follows. That’s what’s happening,” he said, in reference to eastern Nebraska and western Iowa. “These thunderstorms … keep moving right over the same areas.”

In the northeast Nebraska cities of Norfolk and Blair, residents reported shattered windows in homes and vehicles after baseball-size hail passed through. At least one severe thunderstorm capable of producing a tornado was reported near the city of Fullerton. Another was reported in the western Iowa community of Elliott.

On Interstate 29 north of Council Bluffs in western Iowa, more than 25 vehicles had their windows shattered by hail, Landsvork said.

The storms, which are also expected to affect parts of Illinois, Kansas and South Dakota, caused heavy rain in the Omaha area. Police spokesman James Shade said dozens of residents were evacuated from low-lying homes on the northeast side of the city, where several inches of rain fell in an hour.

“It’s just completely flooded these areas, and these homes are now filling up with water in their basement areas, so we’re pulling people out,” he said, noting a 95-year-old woman in a wheelchair who was rescued.

Police also used boats to assist dozens of drivers stranded in floodwaters around the city. Shade said many cars remain stuck on those flooded streets.

The bad weather impacted primary elections taking place in Iowa and South Dakota. Officials in Pottawattamie and Montgomery counties in Iowa, where polls closed at 9 p.m. CDT, reported closing some precincts temporarily due to poor weather.

In South Dakota, where polls closed at 8 p.m. CDT, a morning thunderstorm forced Senate candidate Mike Rounds, who was flying to Rapid City, to land in Pierre.

The severe weather threat arrives amid an unusually quiet late spring, with far fewer documented tornados in May than in many recent years. Bunting said the current system could be most severe because of widespread straight-line winds.

“As we like to say, it doesn’t have to rotate to be dangerous,” he said.