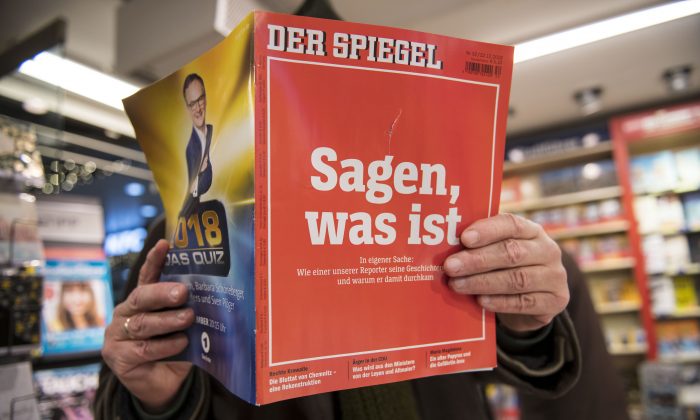 A man looks into the latest issue of German newsweekly Der Spiegel with a cover page that reads, "To say, what is" in Cologne, Germany, on Dec. 22, 2018. (Thomas Lohnes/Getty Images)
Europe

The German reporter at the center of a fake news scandal might soon be charged with embezzlement.

Claas Relotius, 33, was discovered to have faked some of his stories for the German weekly magazine Der Spiegel.

Some of the faked stories include topics such as the U.S. detention facility at Guantanamo Bay, executions, “Trump’s America,” and most recently, a piece on U.S.-Mexico border vigilantes, in which the reporter made up the existence of a sign saying “Mexicans Keep Out.”

Now, Der Spiegel says it is bringing criminal charges against Relotius, alleging that he solicited donations from readers for the aid of Syrian orphans. The magazine has reported that some of its readers say Relotius used a private email address and his personal bank account to collect money donated for the orphans.

Der Spiegel said it’s unsure whether Relotius had many responses to his request, which was made alongside an article he wrote about Syrian street children in Turkey.

Some of the article was faked, the magazine alleges, with a Turkey-based photographer saying the journalist invented parts of the life of one child. The photographer also said one of the children featured might not have even existed at all.

The U.S. ambassador to Germany, Richard Grenell, wrote a letter to Der Spiegel on Dec. 21, alleging that the magazine has an anti-American bias that Relotius was able to exploit.

“These fake news stories largely focus on U.S. policies and certain segments of the American people,” Grenell wrote in the letter, which was published by Der Spiegel.

He continued, “It is clear that we were targeted by institutional bias and we are troubled by the atmosphere which encouraged this recklessness … Editors, fact-checkers, and those in leadership clearly allowed this atmosphere and bias to flourish.”

The ambassador wrote that Der Spiegel’s journalists should have simply called the U.S. Embassy to check the facts before writing articles.

“The fundamental question is how such blatant anti-Americanism could be published without an editor questioning its accuracy and how much untold damage has been done by seven years of unchecked writing,” Grenell concluded.

The editors of Der Spiegel, which has a previously well-regarded fact-checking department, wrote back to the ambassador and apologized to U.S. citizens who were “insulted or denigrated” by Relotius’s articles. Dirk Kurbjuweit, deputy editor-in-chief, wrote in the letter that “anti-Americanism is deeply alien to me and I am absolutely aware of what Germany has the United States to thank for: A whole lot.”

Relotius has been fired by the magazine and has said he regretted what he did and is deeply ashamed.

Although he hasn’t commented since the scandal was uncovered, he did explain his actions to Der Spiegel.

“It wasn’t about the next big thing. It was the fear of failure,” he reportedly said. He added, “The pressure not to fail grew as I became more successful.”

Far from attempting to bury the scandal, Der Spiegel devoted its weekly edition to it. It has also left Relotius’s articles on its website to encourage transparency, but added new articles that fact-check or debunk the originals.

In one instance, the magazine telephoned an interviewee who is a survivor of Nazi Germany, who explained that many of the words Relotius had attributed to her were made up.

Relotius was caught when fellow reporter Juan Moreno suspected that Relotius had made up quotes for a feature about vigilantes on the U.S.-Mexico border. Moreno headed back out on assignment with Relotius with a special assignment of his own: to gather evidence confirming whether Relotius was faking it.

The German Journalists’ Union DJU said the case was “the biggest fraud scandal in journalism since the Hitler diaries.” Germany’s Stern magazine published them in 1983 and later were found to be forgeries.