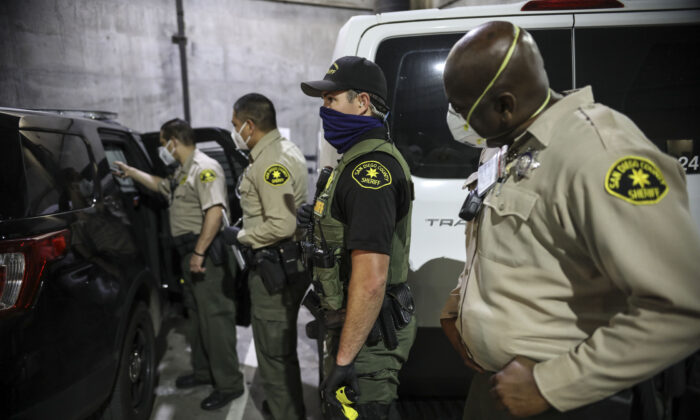 SAN DIEGO—A sheriff’s deputy’s service weapon was discharged at San Diego’s Scripps Mercy Hospital on June 2 during a struggle with an inmate treated and released for booking who tried to take the deputy’s gun.

The incident was reported at about 3:30 p.m. at the hospital at 4077 Fifth Ave. in Hillcrest, according to San Diego Sheriff’s Department Lt. Karen Mullins.

The deputy called for backup and San Diego police, sheriff’s department personnel, and hospital security staff all responded to the call for help, she said.

The deputy used “multiple force options” during the effort to control the suspect, Mullins said. There were reports a Taser was used.

“At some point during the fight, the deputy’s firearm became unholstered and the incarcerated person was able to grab it and discharge it,” she said.

The suspect was eventually taken back into custody and the scene was secured, she said.

“Thankfully, no one was injured by the gunfire and there was no evidence that any bullets left the hospital room where the incident occurred,” she said. “The hospital resumed normal operations shortly thereafter.”

The deputy suffered a broken hand and wrist in the struggle, Mullins said. Detectives with the Detention Investigations unit were investigating the incident.