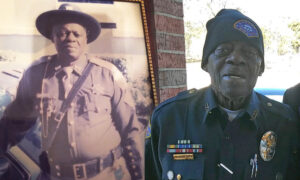 An Arkansas sheriff’s deputy who fatally shot a teenager during a traffic stop was fired July 1 after the sheriff said he didn’t follow the agency’s body camera policy.

Lonoke County Sheriff John Staley said Sergeant Michael Davis was fired after it was discovered he did not activate his body camera until after the fatal shooting of 17-year-old Hunter Brittain shooting took place on June 23.

Staley’s office is yet to release many details about the shooting but the County Sheriff noted that the agency’s policy requires officers to activate their cameras before interacting with the public.

“My review of this deputy’s actions has determined that he did not activate his body camera in a timely way,” Staley said in video released on the office’s Facebook page.

“This means there’s no video of the actual shooting. We see the aftermath, but not the shooting. Due to that failure, I have terminated the employment of this deputy.”

Staley also noted that the decision on whether Davis acted legally in shooting Brittain was to be made by Arkansas State Police and prosecutor, not his office.

Sergeant Davis pulled Brittain over along Arkansas Highway 89 at 3:00 a.m. on June 23 for unknown reasons.

The teen had been taking a test drive in the vehicle with a 16-year-old passenger, Jordan King, and had been trying to repair his pickup’s transmission all night so that he could work that morning, according to KATV.

King told the outlet that on the day of the incident, they had visited a local auto repair shop—Mahoney’s Body Shop—and after they left the store, Davis pulled them over on Arkansas 89.

However, Brittain’s truck wouldn’t go into park, and so the 17-year-old exited the vehicle, a GMC Sierra, to go and retrieve a blue oil jug to put behind his truck’s tires and stop it from hitting Davis’ car.

According to King, Davis then fired at Brittain without telling him to stop or get on the ground as he was placing the jug down.

“They didn’t say one word that I know of,” King said, “I didn’t hear it and it happened so fast.” He alleged that another deputy soon arrived and detained him.

“[He] told me ‘[to] get out with my hands up and pull my shirt up, and then took me to the ground, put me in handcuffs and was dragging me around,” King said. “And then I sat in the back of the cop car for about three hours.”

Brittain sustained a gunshot wound and was transported to a North Little Rock hospital where he later died, the Arkansas State Police said in a short statement last week.

In a statement, the attorneys said the incident points to the urgent need for increased training among every department of the police force across the nation.

“Vehicle trouble should never end with a teenager being shot dead by police. Lonoke County Sheriff’s Office did the right thing by terminating former Sergeant Mike Davis when they learned that he failed to activate his body camera during the traffic stop,” the statement read.
“Body cameras are, in the overwhelming majority of cases, the only way to see the unbiased facts surrounding a police and civilian encounter resulting in injury and/or death.
“When officers turn their body cameras off, they turn off their intent to be transparent along with it. While nothing can bring Hunter back, our team stands in solidarity with the Brittain family, and we plan to help them attain full justice for the heartbreaking and preventable loss they are experiencing.”
The Associated Press contributed to this report.