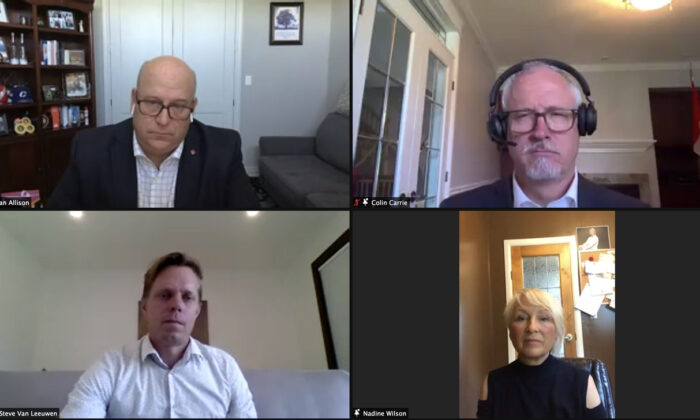 Steven VanLeeuwen, who was relieved of his position as deputy mayor of an Ontario township after speaking out against COVID-19 lockdowns earlier this year, told panelists at an independent inquiry into Canada’s pandemic response that the country is experiencing a breakdown of communication between the public and government at all levels.

He also called for politicians to be held accountable for the adverse affects that the lockdowns and restrictions have had on Canadians.

VanLeeuwen was among four politicians who joined in a cross-party roundtable at the “Citizens’ Hearing” on June 24, co-hosted by the Canadian COVID Care Alliance (CCCA), which provided a platform for Canadians adversely affected by the country’s public health policies to share their stories.

VanLeeuwen, who served as a councillor for the Township of Centre Wellington in Ontario, said he saw an influx of calls and visits from citizens during the pandemic—particularly business owners, who were struggling with the constant changes in public health rules.

He said people began turning to their municipalities for help as they grew increasingly frustrated with the effectiveness of their parliamentary representatives. But he said the municipal councils were also reluctant to provide help to those questioning the measures.

“We saw within the public realm, and within the government realm, a sense of disparity, and it’s mostly disparity within the communities because what we found was that the councils and municipalities didn’t want to touch these subjects,” he said on June 24.

VanLeeuwen added that for public figures advocating on behalf of those criticizing the measures, there was a sense among councils of “How do we get rid of these people?”

“In my case, they actually had to remove me as deputy mayor,” he said.

Early last year, VanLeeuwen joined other politicians from across the country in forming End the Lockdowns Caucus, a non-partisan group that aims to end governments’ lockdown measures through formal challenges.

“I was able to then join the End the Lockdown group to say ‘This is not working, there’s something wrong, we need to take another look,’ and we need to get a dialogue happening within these—not only higher level—but also lower-level governments,” he said. “That was incredible to start that process.”

But the move prompted Centre Wellington Mayor Kelly Linton to introduce a motion to remove VanLeeuwen as deputy mayor—a position that is not elected but appointed by the council—during a city council meeting in February. The council also submitted the case to the Integrity Commissioner of Ontario to determine whether VanLeeuwen had breached the code of conduct.

He told panelists on June 24 that the integrity commission didn’t find fault with his behaviour after a nine-month investigation.

The Epoch Times reached out to Mayor Linton and other Centre Wellington councillors for comment but didn’t hear back.

A CCCA spokesperson told The Epoch Times that they had invited two politicians from each major political party at all three levels of government to join the cross-party dialogue.

When the panelists asked what governments should do to support people and businesses adversely affected by the COVID-19 mandates, VanLeeuwen said more awareness is needed to help people discern between a public health recommendation and a law.

He pointed to the Integrity Commission of Ontario’s report on his case, in which it stated that more than 70 public health rule changes were made over the past 13 months, a frequency he said was “impossible to navigate” for business owners.

VanLeeuwen also called on the government to put money into supporting businesses that are suffering from mounting debts during the pandemic.

“I believe the number one thing that people are looking for is protection in the future, to know that this can’t happen again, that they understand their rights; they’re aware of what’s happened and ‘let’s not make this mistake again’—that’s got to be the moving-forward [approach],” he said.

In addition, VanLeeuwen called for politicians to be held accountable for the adverse impact of pandemic health measures.

“Everybody wants to say ‘I didn’t know,’ but we need to say ‘If you did know, you now have to be held accountable.’ That’s the mechanism to prevent this from happening in the future,” he said.