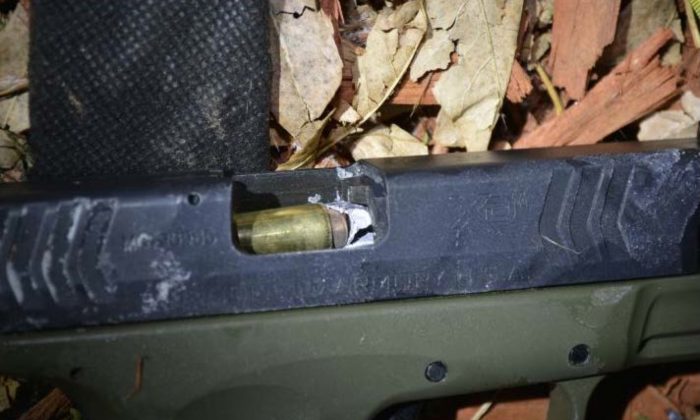 This photo made available on July 14, 2016 by the Aurora Police Department, shows a close-up of an off-duty sheriff's deputy's bullet lodged inside the barrel of an assailant's gun, which investigators say was pointed at the deputy before the deputy fired at him, in Aurora, Colo. Investigators say Arapahoe County Deputy Jose Marquez fired a bullet straight down the barrel of the suspect's gun, a shot they called "one in a billion." The detail emerged in a letter from prosecutors announcing that Marquez was justified in shooting the attempted-robbery suspect, who survived. Marquez also was wounded in the January shooting and is still recovering. (Aurora Police Department via AP)
US

Arapahoe County prosecutors announced on July 13 that an off-duty Colorado sheriff’s deputy was cleared of charges following his shooting an alleged assailant in an attempted robbery incident.

The deputy fired a bullet straight down the barrel of a suspect’s gun, which police called “one in a billion” shot.

According to The Aurora Sentinel in suburban Denver, Deputy Jose Marquez was shot in the shoulder and abdomen on Jan. 26 in an apartment parking lot on East Adriatic Dr. near Rangeview High School.

Marquez told investigators that he was visiting his girlfriend at her apartment when he went outside to take something from his car. As he was walking back, he saw two young men wearing face masks.

One of the suspects told him to “give it up,” Marquez said, adding that they fired their weapons first.

Marquez shot back at the suspects. While one of them got away, the other was wounded in the leg and later arrested, police said. Prosecutors identified the wounded suspect as Jhalil Meshesha.

“Deputy Marquez reasonably believed that his life was in danger and acted reasonably in shooting Meshesha, and that he used an appropriate level of physical force. I further find that Deputy Marquez’s actions were justified and he did not violate Colorado law,” the letter said.

Since the January incident, Mark Techmeyer, a spokesman for the Jefferson County sheriff’s office, said Marquez’s wounds have not permitted him to return to work.