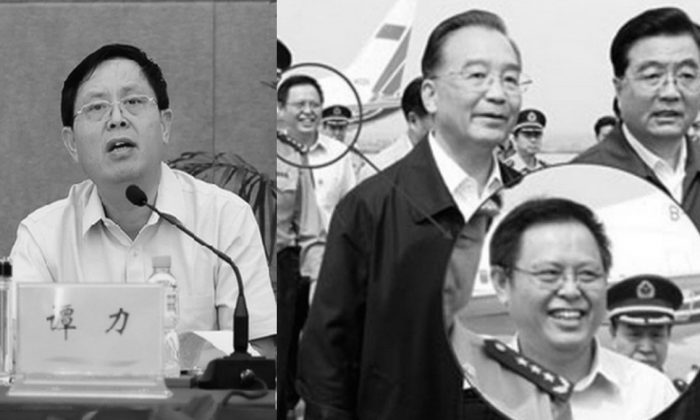 Tan Li, deputy governor of Hainan Province, was put under investigation for "serious violations of law," according to an announcement by the anti-corruption watchdog on July 8. (Screenshot/hkwb.net & hk.apple.nextmedia.com)
China

Just a week after purging one deputy governor of Hainan Province, China’s anti-corruption watchdog announced that they are investigating a second deputy governor, Tan Li, following rumors earlier this year that he was forbidden to leave the country.

The Central Commission for Discipline Inspection announced on its website on July 8 that Tan, deputy governor of southern China’s Hainan Province and member of the Communist Party’s (CCP) Provincial Standing Committee, is being investigated for “suspected serious violation of law,” a code phrase for corruption.

Former Hainan deputy governor Ji Wenlin, was expelled from the CCP last week, along with two other high ranking officials.

Tan and Ji, who was a close ally and former secretary of the powerful Zhou Yongkang, former Politburo Standing Committee member and past head of the Politics and Legal Affairs Committee, enjoyed close working connections as deputy governors. The rumors of Tan being restrained from going abroad surfaced in February, when Ji was sacked.

Tan was well-known for the photograph of him smiling during the rescue operations at the site of the severe earthquake in southwestern China’s Sichuan Province in May of 2008. Tan, who was serving as the CCP’s municipal party secretary in Mianyang City, received then president and premier Hu Jintao and Wen Jiabao at the airport four days after the earthquake.

A photo taken by state-run Xinhua, showing Tan with a wide smile on his face while others seemed solemn, attracted noisy criticism on the internet at the time. The 8.0 magnitude earthquake, which caused nearly 70,000 deaths, over 300,000 injuries, and over 18,000 missing, did not seem to be a smiling matter to netizens.

The loud criticism directed at Tan didn’t slow his career. On the contrary, Tan was promoted to be a member of the CCP’s Provincial Party Committee in Hainan and minister of Hainan Propaganda Department the following March on the merit of his “outstanding actions during the earthquake rescue operations.” Tan was again promoted in 2010 to become the deputy governor of the province.

Tan also had substantial financial and real estate deals with Chinese tycoon Liu Han, who was sentenced to death in May for 15 offenses including murder, assault, and other crimes. Tan received “valuable considerations” from Liu, according to state-run Beijing News. Many high level officials were in Liu’s circle of friends, Chinese media Caixin says, pointing out that Zhou Bin, Zhou Yongkang’s eldest son, was an important business partner of Liu.

59 year-old Tan worked as a municipal official in Sichuan for decades before he moved to Hainan, with years of working connections with former deputy secretary of Sichuan Provincial Committee Li Chuncheng, and former chairman of Sichuan Provincial Committee Li Chongxi, both Zhou Yongkang cronies who have been sacked for corruption under president Xi’s anti-corruption campaign.