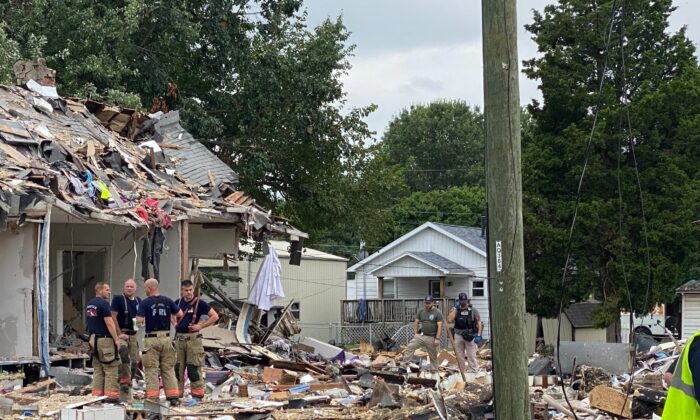 Aftermath of the house explosion on Weinbach Avenue in Evansville, Ind., on Aug. 10, 2022. (Courtesy of Evansville Mayor Loyd Winnecke)
Crime and Incidents

An explosion has obliterated a home in the Indiana city of Evansville on Wednesday killing three people and seriously damaging almost a dozen more houses within the blast’s 100-foot radius, according to local officials.

“I can confirm three fatalities and one injury, although first responders have not completed their search efforts at this hour,” Evansville Mayor Loyd Winnecke told The Epoch Times on Wednesday night.

“There are 11 homes that are uninhabitable. The American Red Cross is coordinating temporary placement for displaced residents,” he added.

Evansville Police Department spokeswoman Sgt. Anna Gray said at least one other person was injured and taken to a local hospital for treatment, Evansville Courier and Press reported.

The cause of the explosion has not been determined. Officials from the Bureau of Alcohol, Tobacco, Firearms and Explosives and State Fire Marshal are due to begin their investigation on Thursday morning, according to Winnecke.

“The scene is devastating. It was a punch to the gut when I viewed the scene with our fire chief,” the mayor said. “First responders were phenomenal. One of our city’s 14 fire stations is right around the corner from the blast sight and arrived very quickly.”

Evansville Fire Department Chief Mike Connelly said a total of 39 houses were damaged by the explosion just before 1 p.m. local time. He said the department has not confirmed how many of the houses were occupied when the explosion happened because “some were too unstable to enter.”

Building debris was strewn in a 100-foot radius from the property, including wooden boards, window glass, and insulation, Connelly said.

Dave Anson, chief deputy coroner for Vanderburgh County, told The Associated Press that the identities of the people who died would not be released until the next of kin has been notified.

Aerial video posted on social media shows damage in a residential neighborhood with police and fire vehicles on the scene in Evansville, on the Kentucky border.

The blast was felt from nearby Vogel Elementary School, which reported via social media that students were safe and that it would implement protocols to get the children home safely after classes were dismissed.

“Students and staff at Vogel are safe following a house explosion a few blocks from the school. Many streets in the area are currently closed,” Evansville Vanderburgh School Corporation said on Twitter.

Local gas utility company CenterPoint Energy last attended the home in January 2018, according to Connelly. The company issued a statement saying it “worked with first responders to secure the area.”

“CenterPoint Energy is working closely with the Evansville Fire Department, State Fire Marshal, and other agencies as the investigation of this incident continues,” the utility said, Associated Press reported.