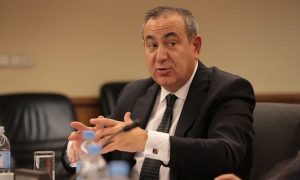 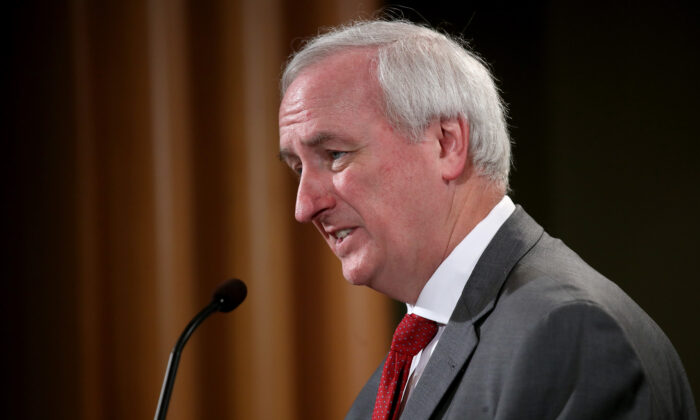 Deputy Attorney General Jeffrey Rosen speaks during a press conference at the Justice Department in Washington, on July 19, 2019. (Win McNamee/Getty Images)
US News

Deputy Attorney General Jeffrey Rosen raised concerns about an emerging trend of progressive district attorneys (DA) who are refusing to enforce the law while pushing their own agenda, saying that these “social reform” DAs are endangering public safety and undermining the Constitution.

Rosen, who spoke at Wake Forest School of Law on Nov. 8, said the “small but increasing number” of state and local prosecutors who have publicly announced “radical decriminalization policies” and have vowed to not enforce entire categories of law that do not conform to their personal notions of what they think the law should be, is threatening to undo the Justice Department’s (DOJ) progress in reducing crime across the country.

The deputy attorney general echoed concerns U.S. Attorney General William Barr raised back in August in a speech to the Grand Lodge Fraternal Order of Police where he said these progressive DAs are “demoralizing to law enforcement and dangerous to public safety.”

Barr said these DAs “style themselves as ‘social justice’ reformers” and “spend their time undercutting the police, letting criminals off the hook, and refusing to enforce the law.”

During his speech, Rosen said these DAs have openly announced that they will not prosecute defendants who have committed offenses including drug crimes, property crimes, as well as resisting arrest and assault of police officers.

“Despite a decade of record-level drug overdose fatalities, whole categories of drug crimes, including several distribution offenses, are being ignored and not enforced,” Rosen said. “Likewise, criminals who commit theft below certain thresholds, such as below $500, are given a free pass. In several jurisdictions, reform DAs have effectively decriminalized prostitution, making it more difficult to fight human trafficking.”

“If those weren’t surprising enough, social-reform DAs have announced that the categories of malicious destruction of property, and shoplifting, will go unprosecuted. … Even offenders who resist arrest and assault law enforcement officials are skating prosecution under these DAs’ non-enforcement policies,” he added.

Rosen said in areas where DAs are applying their progressive agenda, communities are feeling less safe as crime rates are rising. He gave an example from Durham, North Carolina, which saw a four percent increase in the violent crime rate and an 18 percent increase in the murder rate compared to the same time last year after Satana Deberry, the district attorney for the area was elected.

He expressed concern that these DAs are failing to fulfill their obligation as a prosecutor to the community and to the victims of crime.

“A prosecutor’s duty is straightforward—enforce the law fairly and impartially and keep the public safe,” he said. “No society can have justice when stealing has been effectively licensed, open-air drug markets are allowed to flourish, and neither victim nor police officer trust that those who break the law will be held accountable.”

He went on to say that the non-prosecution strategies often ignore the harm felt by victims of crime.

“Victims deserve better. They deserve public officials who will consider the individual circumstances of their case and seek real justice in accord with the laws that are on the books,” he said.

Rosen acknowledges that DAs have a degree of prosecutorial discretion where they decide what cases to prosecute and how to spend their resources, but he said the progressive DAs are not making “individualized decisions based on the facts and circumstances of particular cases,” rather they are “predetermining whole categories of offenses for non-enforcement.”

He says such actions risk undermining the separation of powers because they are “effectively legislating through inaction.”

“These DAs’ decriminalization strategies go far beyond prosecutorial discretion and fly in the face of the fundamental concept that no one part of the government exercises total control of our legal system,” he said. “If you believe in the rule of law, that is a problem.”

The deputy attorney general also addressed a common argument DAs raise to justify their refusal to enforce existing laws. Progressive DAs have argued that extreme non-prosecution policies are “necessary” to mend what they say is a “‘broken’ criminal justice system.”

“But why are we to assume that the system is not working?  Violent crime rates in 2018 returned to near historic lows,” he said.

Rosen said, citing a Bureau of Justice Statistics report, that the national incarceration rates have fallen 13 percent over the last decade to a 20-year low.

“While there can be individual cases that deserve further attention or redress, it is a fallacy to focus solely on the number of people in prison, as though they were rounded up en masse, which is not the case,” he said.

One of the notable “social reform” DAs who has faced criticism for his extreme steps to reform the criminal justice system in his area is Philadelphia County District Attorney Larry Krasner.

Krasner, who was elected in 2017 and whose campaign received help from controversial leftist George Soros’s political action committee during the race, is seen as one of the most progressive district attorneys. He has implemented policies to avoid prosecution and has also repeatedly clashed with law enforcement and placed 29 Philadelphia police officers on the DA’s “do not call” list, The Philidelphia Inquirer reported.

Some have praised Krasner for his boldness, while others have slammed him for creating a “culture of disrespect for law enforcement” in the city, including William McSwain, the U.S. attorney for the Eastern District of Pennsylvania who linked an incident where six Philadelphia police officers were shot in August to Krasner.

“It started with chants at the DA’s victory party–chants of ‘[expletive] the police’ and ‘No good cops in a racist system,'” McSwain said in a statement. “We’ve now endured over a year and a half of the worst kinds of slander against law enforcement—the DA routinely calls police and prosecutors corrupt and racist, even ‘war criminals’ that he compares to Nazis.”

“This vile rhetoric puts our police in danger. It disgraces the Office of the District Attorney. And it harms the good people in the City of Philadelphia and rewards the wicked,” he added.